THEY FOUGHT TO THE END

Annual food drive is back at Veterans Park

RIVER FALLS – For the past 30 years, the Grumpy Old Men Food Drive has been a familiar and beloved sight curbside near Veterans Park in downtown River Falls the week after Thanksgiving. It has raised thousands of dollars for the local food shelf and brought in untold pounds of food to feed those in need.

New Grumpy Old Men? Where does the “new” come from?

When original Grumpy Old Men Jerry Carter and Mel Germanson began the food drive 31 years ago, “Grumpy Old Men” was the movie showing at Falls Theater, thus becoming the inspiration for the name. At age 86, they handed the reigns over to retirees Craig Miles and Rick Bowen, who with a group of retired River Falls School District educators, have kept the tradition alive.

Ellsworth football players gathered after the WIAA Division 4 Championship game on the turf at Camp Randall Stadium in Madison Thursday, Nov. 18. After a first-quarter scoring barrage from Catholic Memorial, the Panthers fought back but fell 21-12. Senior Max Grand gripped the state runner-up trophy as players listened to offenisve coordinator Jason Janke, who told them they were by far the best public school at their level in the state. Photo by John McLoone

Mel Germanson and Jerry Carter were fixtures downtown River Falls the week after Thanksgiving for more than two decades. Their Grumpy Old Men food drive has raised thousands of dollars over the years. Photo courtesy of Craig Miles FOOD DRIVE

“When he (Carter) decided to quit, we decided to keep it going,” Miles said.

Germanson, a retired UWRF registrar, lives in town and tries to make a cameo appearance each year, Bowen said.

“In a nutshell, Jerry was service-oriented,” Bowen said. While the exact inspiration for the food drive’s beginnings is unknown, Miles recalled Carter telling a story about a little girl who wondered how people in need would get food for Christmas. He gathered blankets, socks, coats, anything he could collect to help those in need, Miles said. It morphed into a food drive.

Traditionally, each year the group raises about $10,000 in cash and donates seven pickup loads of food to the food pantry. While food donations are always appreciated, money can help people’s kindness stretch further, the men said. For each $1 someone donates, the food pantry can get $6-7 worth of food at a local warehouse food supplier.

However, Miles said he understands that some people, especially children, enjoy donating something tangible. A little girl stands out in his memory who brought down canned food two years ago and was so proud to donate it.

Last year, the pandemic didn’t hinder the Grumpy Old Men’s resolve to continue helping the food pantry. A virtual event was held and the community was encouraged to mail or drop off donations at the food pantry during the month of November. In 2019, the group raised $12,500 in cash and more than 600 pounds of food.

“With Jerry passing in December, we just wanted to make sure this continues,” Miles said. It’s all about what he started. It’s his legacy and I think he would be happy.”

The Grumpy Old Men live by the mantra that if you’re kind and do for others, kindness and service will spread. This fall, Miles challenged the UW-River Falls football team to bring in their spare change for the food pantry. He told them if they brought in $100, the W.I.N.G.S. Foundation (which he started with his wife) would match it. Emery Driving School said they’d match $100 too. Imagine his surprise when the team brought in $1,000. He was delighted.

“When you do an act of kindness like that, you never walk away feeling bad,” Miles said. “It gives back to you 10-fold. You never hear anyone say they feel bad for doing a good deed.”

Those wishing to support the Grumpy Old Men food drive have two options: 1. Drop off donations of food or money at the Veterans Park flagpole 9 a.m. to 6 p.m. Tuesday, Nov. 30.

The new generation of Grump Old Men appreciates the com-

Jerry Carter and his son Greg Carter (who will be at this year’s food drive) pictured at a past Grumpy Old Men food drive in Veterans Park. Photo courtesy of Craig Miles 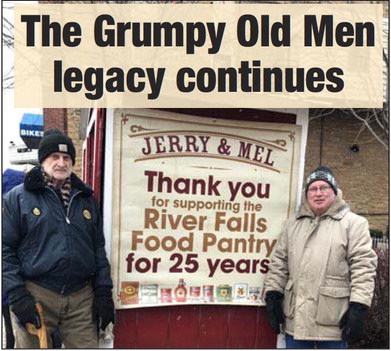 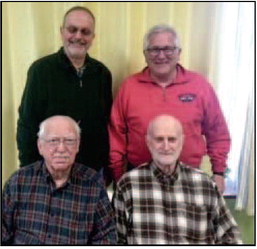 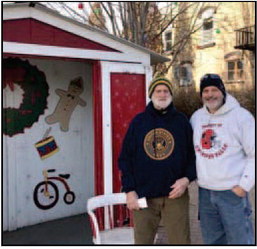