For the second consecutive season, the Ellsworth Panthers girls basketball team is 2-0 to begin the year. Ellsworth earned its second win of the season against Saint Croix Central on Tuesday, Nov. 23, in a 52-34 victory at home.

The Panthers entered the game 1-0, with the victory being a 66-59 victory against Mondovi. Saint Croix Central entered the game with an 0-1 record, which featured a 51-28 loss against New Richmond.

After starting the game with 10 unanswered points, Ellsworth was in the driver’s seat early in the first half. However, Saint Croix Central began to make a run coming out of the timeout. A couple of offensive rebounds for Saint Croix Central led to easy layups. Turnovers by Ellsworth also contributed to fast-break points for SCC, who quickly cut the lead to two points at 10-8 with six minutes to go in the first half.

Ellsworth again went on a scoring run of its own and ended the half with a 24-14 lead over SCC, partially due to an ill-advised foul by SCC with two seconds left as Janke attempted a deep three-pointer. Janke went to the charity stripe and made one of three free throws to cap off a quality first half.

Coming out of the locker room for the second half, Ellsworth had a 10-point advantage over visiting SCC. Janke picked up right where she left off in the first half. Less than one minute into the second half, Janke drove to the bucket, got fouled, and still managed to make the layup. She converted the and-one at the free throw line to extend Ellsworth’s lead 27-14.

Two possessions later, Janke caught the ball behind the threepoint line in the corner by the Ellsworth student section. She pulled up for three and buried it to give Ellsworth a 30-16 advantage with 15 minutes remaining in the second half. The Ellsworth offense continued to click. Freshman forward Morgan Halverson provided quality minutes off of the bench. Her highlight play of the name came with 11 minutes to go in the second half when she too was fouled hard on a driving layup. After rattling around, the shot went in, and she went to the free throw line and successfully converted the and-one to give Ellsworth a 37-16 lead.

When all was said and done, Ellsworth defeated Saint Croix Central 52-34 to advance to 2-0 for the season. After the game, Ellsworth head coach Jason Janke spoke about the victory.

“We played like we are, which is kind of young and varsity inexperienced,” Jason Janke said. “We have a few seniors, but we’ve got very little varsity floor experience. Losing the kids we did last year, there are a lot of points to be made up and we’re figuring that out.”

Jason Janke spoke about the development of roles and how, even two games into the season, players are already stepping into their natural positions.

“Molly (Janke) is a kid who can score the ball, and we had some shooters show up tonight, Taylor Peterson knocked down a couple of shots that were critical for us. Defensively we’re finding some roles and we would like to do that first.”

One key to the game for Ellsworth was the number of second- chance opportunities that the bigger post players provided for the team. Molly Janke is as talented a scorer as there is in the Middle Border Conference. When the Ellsworth post players are grabbing offensive rebounds and getting Molly Janke multiple opportunities, it’s going to be hard to beat Ellsworth. Jason Janke spoke about those additional scoring chances.

“I thought Kayla Kressin had one of her better – especially in that first half, she did a very good job,” Jason Janke said. “She’s always been a strong rebounder in her career. She’s doing a much better job now of turning around and putting it in the basketball. She did a really nice job.”

Kressin’s offensive rebounds provided multiple looks for the Ellsworth offense and it gave star player Molly Janke additional scoring opportunities. She shot 50% from the three-point line en route to 15 points, eight rebounds, three assists and five steals. She was all over the court and was the difference-maker in Ellsworth’s double-digit home victory.

“I think it’s easy to forget (Molly Janke) is a sophomore,” Jason Janke said. “I have to do a good job of keeping my composure with her because she’s a nice player and we’re asking a lot of her. When she gets cooking, she can really cook.”

After the game, Molly Janke spoke about her performance and the blowout victory at home against Saint Croix Central.

“Overall, I’m happy with how it turned out,” Molly Janke said. “We had some turnovers that can’t happen later on in the season. Our conference is really good, and we’ve got to clean it up if we want to keep improving and keep winning. I think our defense improved a lot and if we clean up our offense and limit turnovers, I think we’re going to be fine.”

Ellsworth is more than fine. The Panthers improve to 2-0 for the season and 1-0 in Middle Border Conference action with important contributions coming from Molly Janke, Kressin, and Harrington. Ellsworth’s next game is on Saturday, Dec. 4, on the road against Boyceville. 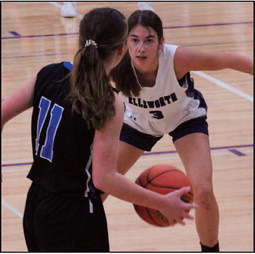