Police Chief Chris Thibado has been working in Elmwood for almost two years. He runs the day-to-day operations of the department with help from the village clerk, Amy Wayne, from time to time.

He also performs the duties of being a law enforcement officer on top of that.

Police Chief Chris Thibado has worked at the Elmwood Police Department for about two years. He loves the close-knit community and working with children. Photo by Melissa Thorud CHIEF

Most departments in larger cities have multiple positions to cover the workload, but in a smaller village like Elmwood that is not the case.

“It can be challenging at times, in most departments, not everywhere, but usually there is someone who handles evidence, someone that handles administration, someone to type the reports and here it’s all just me and I cover all those bases,” Thibado said.

Being a one-man department can be challenging but Thibado enjoys it. The community is close-knit and this helps make his job a bit easier.

“I try to do community policing as much as possible here; my favorite part of working in this area is working with the schools and doing the community activities,” he said.

The neighboring communities also give a helping hand when needed. Many of the small towns in Pierce County lean on each other and provide support. For Thibado, he is able to call on neighbor Spring Valley’s police department and the Pierce County Sheriff’s Department if he needs assistance.

“Spring Valley Police Department and the Sheriff’s Office have both been very helpful and they always lend their services when it is needed and everyone there has been great at supporting me here,” said Thibado.

Although he runs the department alone, he still needs a day off once in a while. When he is out of the office and offduty, the county sheriff’s office usually steps in or he is notified when he is needed.

“If a call comes in when I am not on-duty, they’ll notify me and I usually can take care of the follow up for it as well,” he said.

The toughest part of running a department by himself is the extra paperwork that goes into with documenting every incident. “For every call that an officer goes on, there is a lot of paperwork that goes with it and it has to be reviewed and sent to the District Attorney’s office and it can just be tedious and time consuming on top of other responsibilities,” he said.

But the learning curve hasn’t stopped him from protecting the Elmwood community each day. “The biggest part to get used to was the administration aspect of the job, you don’t realize all the work that goes into it and it was quite an eye-opening experience for me,” he said.

Thibado has been in law enforcement for many years, first in the Air Force as a security forces officer and then at Chippewa County Sheriff’s Office for eight years. Growing up near Menomonie, coming closer to his roots made sense for him.

He really enjoys serving the Village of Elmwood and plans to retire there. He looks forward to meeting those he serves at community events. Make sure to stop and say hi. 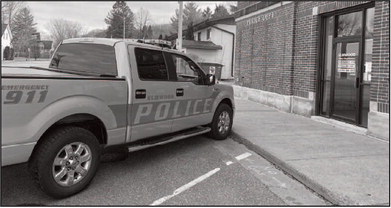