The cast and crew of Prescott Middle School’s “Frozen Jr.” takes a fun selfie with co-director Dianna Leigh. This is the first production fully staged by PMS students. Photo courtesy of Dianna Leigh

The “Frozen Jr.” cast at Prescott Middle School runs through its choreography during a recent rehearsal. Photo courtesy of Dianna Leigh PRESCOTT – For the first time ever, Prescott Middle School will perform its own production fully cast with middle school students. Frozen Jr. hits the stage this weekend and promises to be a treat.

Co-director Dianna Leigh said many of the middle schoolers have been involved in musicals or auditioned as ensemble members or for smaller parts in high school productions. However, this is the first time PMS has done its own production.

“A musical has been in the works for the last couple of years with previous directors,” Leigh said. “However, COVID put a stop to all productions, especially the creation of a new program/production of a show. Now that there is some normalcy and stability in schools, we have been fortunate enough to put on the musical this year!”

Students started rehearsing the third week in September and have been going strong since. Frozen Jr. was the clear winner when choosing a show for many reasons, Leigh said. Since it’s a winter-themed show, the timing is perfect. The cast make-up and interest pointed in the direction of a production with strong female leads. And lastly, the show is budget-friendly, which is helpful when launching a new theater program.

“I’ve directed Frozen Jr. before and knew I could get away with a minimal budget as this was a new activity for Prescott and we weren’t sure of our financial situation,” Leigh said. “After all of those factors were considered, it was clear that Frozen Jr. met the mark on all accounts for this year!”

As is the case when meshing many schedules, the most challenging part of staging the musical has been balancing students’ time.

“I really push for students to be involved in whatever they want, so it isn’t a sports vs. music vs. anything battle,” Leigh said. “That being said, it does make for many rehearsals where you are missing parts of your cast for some or all of the rehearsal time.

“The challenging part is creating blocking or choreography with a person in mind, but they might not be present and have to learn it later.”

Leigh estimates the students had about 90 hours of rehearsal time, which is the minimum amount of time to successfully put on a show, she said. She and co-director Abigail Schultz have spent at least another 100 hours on top of rehearsals, with planning, set construction, communications, costume shopping and more.

This week is “tech week,” when the cast and crew get to see it all come together before the public views the show. Rewarding indeed, after watching their plans and dreams being put on hold during the pandemic.

“It’s been so emotional as the director to watch fine arts be put on hold during COVID and to see all of your hard work come together with successes and amazing work with the students,” Leigh said. “I truly can’t describe the joy it brings me when it all comes together.”

Rehearsals, while hard work, also bring moments of hilarity and joy. Leigh has enjoyed watching the middle schoolers try to conquer learning how to act romantic and in love.

“We all know there is a love story in Frozen and most of these students haven’t experienced true love yet, despite what they may think,” Leigh said. “So asking a student to look like you really love another character and propose to them was just hilarious in rehearsals. They are all so awkward with each other it just makes for a great time of learning and laughter.”

“We are very proud of everyone and have loved the theater community that Frozen has brought to the middle school,” said Hegland.

Showtimes are 7 p.m. Friday, Dec. 3; 7 p.m. Saturday, Dec. 4 and 2 p.m. Sunday, Dec. 5 at Prescott Performing Arts Center. Tickets can be bought beforehand at https://prescottschooldistrict.th undertix.com This allows people to select their seat(s) prior to arrival and print their tickets at home to avoid lines at the door.

“The biggest thing to keep in mind is that we will be doing our best to make an animated story come to life with the help of a little Disney and technology magic, but I can’t give away all of my secrets,” said Leigh. 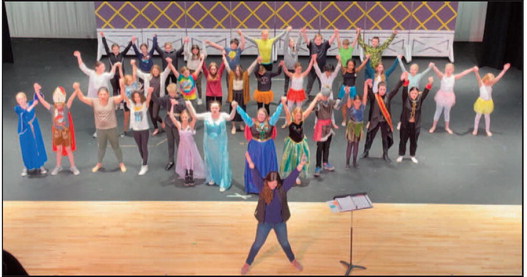