A local woman has turned cherished childhood memories of fishing with her grandparents into a children’s book, which she hopes inspires girls of all ages to fish and have fun outdoors.

Carin Thoms, who currently lives north of River Falls with her husband, grew up on a farm with her three younger sisters near Stockholm. She graduated from Pepin High School, and spent a lot of time in Prescott as well where she worked at Ptacek’s. If you grew up on a farm, you know it’s tough to leave the farm, especially when you have animals. Thoms and her sisters spent summer vacations fishing with their grandparents and cousins in central Wisconsin, on the banks of cranberry bogs near Warrens.

“They’d pile all the grandkids, all 11 of us, in the van and take us all fishing,” Thoms said. “How did he (Grandpa) have the patience?”

Taking children fishing does indeed take a special type of patience. Tangled lines, replacing broken bobbers, putting wiggly worms on hooks, teaching how to cast, taking fish off poles. Those summer days impressed themselves into Thoms and eventually inspired a passionate love of the outdoors.

After high school, Thoms went to college for engineering where she discovered she just didn’t have a great relationship with calculus. When her younger sister joined the military, she felt inspired to do the same. In 2001 she joined the Army National Guard. She was stationed out of Platteville, where she worked operating heavy equipment. While deployed in Iraq, she helped

Author Carin Thoms wrote ‘Sara Goes Fishing’ in hopes of inspiring all girls, including her nieces, to love fishing and the outdoors. Photo by Sarah Nigbor SARA

While stationed overseas, her grandpa wrote to her religiously. He also sent her bags of Tootsie Rolls every couple of weeks, she recalled fondly. Those memories of fishing on the banks of Wisconsin cranberry bogs were never far away. In fact, Thoms and husband Aaron met on a blind date, set up by a friend who knew they both loved the outdoors and fishing.

When she returned from her deployment, she completed a communications degree at UW-River Falls. She served in the National Guard for 10 years before being medically discharged in 2011. She currently works in communications role for the University of Minnesota.

She is a doting aunt to her three nieces. When they were old enough, she and Aaron were excited to bring them fishing. He has always had a dream to have some sort of career or enterprise in which he can teach kids how to fish.

When Thoms gives the girls gifts, she likes to give them money for future adventures or books. Since she was looking forward to creating fishing memories with them, a book about girls fishing would have been the perfect gift: Except, she couldn’t find any.

Her background and resources in communications came in handy. While helping a friend pursue the dream of publishing a book, her own path slowly led in that direction as well. At first, she planned to maybe publish it privately using Shutterfly and family snapshots, as a gift for her family. But when she had a nonprofit review the manuscript to provide literary critique and it received favorable reviews, she thought of taking it bigger.

She began researching and contacting publishing companies, and settled on a small, indie publishing company in Minneapolis owned by two women. They helped her hone her vision for the book, which is to inspire girls to embrace fishing and the outdoors. Out of the three illustrators she interviewed, she knew right away that Michael Putnam was the one who could bring her story to life with his art. She was immediately drawn to his style.

“It’s like he somehow pulled them (the illustrations) out of my head,” Thoms smiled.

“Sara Goes Fishing” tells the story of two sisters, Sara and Molly, who go fishing with Grandpa. They help him dig worms, even though Sara thinks it’s gross. Their lines get tangled and Molly has to help Sara put worms on her hook. Sara gets impatient waiting for a fish to snatch her bait, but learns along the way that the time spent with her beloved grandpa is the true gift.

Thoms own grandpa died in 2012, but his memory will live on in her heart and between the pages of her book. Her grandma has at least 10 copies of the book on hand at all times, and tells anyone she can about her granddaughter’s accomplishment.

“I am blessed to have such great grandparents,” Thoms said. Thoms recently spoke at a Prescott Kiwanis meeting, and hopes to partner with Kiwanis and the Great River Road Visitor and Learning Center on programming centered on fishing basics, boating and water safety, or inspiring children to love fishing. Thoms feels energized by the thought of creating meaningful partnerships to bring these ideas to life. A lifelong goal is to one day have a business devoted to boating, fishing and encouraging families to love the outdoors. And don’t be surprised to see more books in the future.

She’s grateful to many local businesses and organizations, such as Ellsworth Elementary School, Ellsworth Cooperative Creamery and Ptacek’s for promoting her book. On Dec. 4, she can be found at Evers Farm Holiday Barn (W10660 State Highway 35, Pepin) from 10 a.m. to 5 p.m., along with holiday vendors, horse-drawn wagon rides, Santa and Mrs. Claus, treats and more.

To learn more about Thoms and her future endeavors, visit www.carinthoms.com

Carin Thoms’ grandpa used to take her and her sisters and cousins fishing every summer. The cherished memories of tangled lines, wiggly worms and joy of fishing inspired her story ‘Sara Goes Fishing.’ Photo courtesy of Carin Thoms 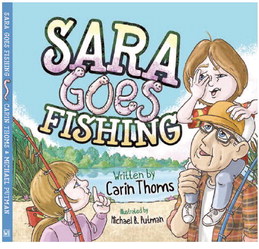 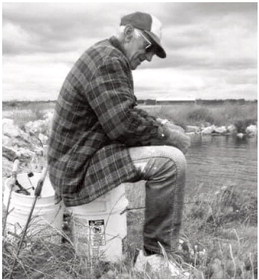