Luke Savage celebrates his second goal with teammates in front of the student section on Saturday afternoon. Savage had a role in every point scored for the Raiders against Minneapolis. Photo by Bruce Karnick
News
Sports

Hockey and lots of it

The girl’s hockey season has been in full swing for a few weeks now and last week, the girls were busy. They started the season on a three-game win streak that ended against East Ridge with a 3-2 loss on Saturday, November 20. Monday and Tuesday, the girls came back to the Hastings Civic Arena and worked their tails off at practice, building up to the Holy Angels game on Wednesday before Thanksgiving.

“We have a good team, we have a VERY good team, I’m just, I’m upset,” is how Head Coach Tim Duggan started the interview.

Duggan was not happy after the loss to Holy Angels, a point which was clear with his body language and tone.

“I thought we played well. I thought we played really well, I think we’ve maybe had, I thought we played two better periods of them, and they had one good period. Then we play hard like that, and then we come down and let in to, in my opinion, soft goals. It’s unfortunate, but we were good. We were really happy with how we are playing I have no complaints about that game or the East Ridge game. Pretty much everyone we played, we played well, and we’re getting better. And you can see the puck movement out here. And you can see the passing. We’re still making little, little mistakes, but we have a great combination of young and old. And they get it now, we’ve never moved the puck like this and they are understanding what’s going on and we’re happy about that. But it all starts between the pipes and that needs to be better,” Duggan explained.

Holy Angels won 4-0, the first two coming in the first period against Senior Lauren Dubej. At the first intermission, the decision was made to change goalies, in went Nicole Vander Heyden. Vander Heyden kept Holy Angels scoreless in the second period but let in two of her own in the third. It was a rough night being in net for Hastings.

The loss made the upcoming trip to Duluth one that the girls needed. They left Friday to play against Proctor/ Hermantown, a consistent state tournament team and last years undefeated Class A state chamipions.

Looking at that matchup and how good the Mirage have been, this was likely to be one of the toughest opponents the Raiders would face this season, and it was. The Mirage jumped out to a 1-0 lead 43 seconds into the first period and never looked back. This game was a rough start for Junior keeper Alexis Steinke. Steinke faced 28 shots, allowing seven to go in. The lone bright spot on the stat sheet for Hastings was Maddy Daly scoring in the third period on a pass from Kiki Radant. The final was 7-1.

Saturday, the girls played the Duluth Northern Stars in the afternoon. Hastings had the first period lead 1-0 when Kyra Erickson put a Jade Schauer pass into the back on the net. Duluth powered back to take the lead 2-0 in the second period. Schauer logged another point in the books, this time tying the game at two on an unassisted goal in the third. Schauer then connected with Radant to give the Raiders the lead with 2:24 left in the game.

Duluth tied the game with 42 seconds left to force an extra period, but that extra period was short lived. Radant set Addie Seleski up for the game winner 18 seconds into OT to give Hastings the win.

Vander Heyden faced 20 shots in this game, saving 17, and Hastings had 31 shots on goal, getting for past the Duluth goalie.

The girls will continue the long time away from home with six remaining of eight straight away games. First they face Eagan in Eagan Tuesday, November 30, then they travel to Minnetonka Ice Arena to take on Hopkins on Thursday, December 2. On Tuesday, December 7, they travel to West St. Paul Arena to take on the Riveters of Two Rivers / St. Paul and then Tartan on Friday December 10 to the Tartan Ice Arena. All four games have the puck drop scheduled for 7:00 PM The boys had their first game of the season, a non-conference tilt that had them facing a tough and fast Minneapolis team at home in front of a packed crowd.

First year Raider Head Coach Matt Klein talked about the visitors after the game. “We just knew they would be really well coached. The Minneapolis program is a conglomerate of several high schools, and they do a really good job with their youth system. We knew they would be strong coming in and they were.”

It was clear, the Raiders were on a mission to set the tone of a fast paced, aggressive style of hockey. There were pucks and bodies flying everywhere from both teams. The sounds of a check into the boards or a solid hit on the ice had the fans yelling for more.

“It can be part of the game, and every game is gonna have a different feel. And this, this game got to that point where it was tough to move at times. And, you know, if you get hit, it’s more important, what do you do next? Are you going to be the kid that continues to work through it? Are you gonna be a kid that’s gonna retaliate and be a part of it? We finished really well staying out of it,” explained Klein.

The penalty summary might say a little different, but it could have been much worse. Both teams had 10 penalty minutes, Minneapolis drew five visits to the box and Hastings had four with one being a double minor.

The first penalty of the game gave Hastings the lead, Collin Stewart connected with Luke Savage at 4:42 into the first. Minneapolis came back even more aggressive in the second to tie the game just 3:25 into the period. Savage again found the back of the net on a beautiful shot from the left that was set up by John Chorlton.

The third period had frustrations of players kicking in all over. Guys were getting chippy on both sides and fights nearly broke out a few times, which is a huge nono in high school athletics. Hastings looked poised to win the game until Minneapolis scored with 3:44 left in the game to tie it.

With just under 2:00 remaining, Savage made the play of the game. He had a hard check in neutral ice to break the puck away from a Minneapolis player and found Stewart who then found Connor Stoffel crashing the offensive zone on the right side of the net. Stoffel sniped the top left of the net beating the goalie’s blocker side, giving Hastings the 3-2 lead with 1:39 left in the game.

“I had a lot of chances, I just kept bearing down on my stick and telling myself it was gonna come. Finally the puck found me at the top of the circle, made the right shot and it went in, and we took the lead, game winning goal,” smiled Stoffel.

There was a little something extra special for Stoffel getting this first game winning goal of the season. “You know, being a part of this team and especially with my dad coming on this final year. I mean, there’s no one else I’d rather spend time with than my dad. To be able to score the game winning goal in front of him with him coaching me, that’s a hell of an experience.”

After the game, Klein was hit with the tough question out of the gate… First win! What do you think? “Ha ha, it’s a pretty cool learning experience, you can feel good leaving the rink when Minneapolis played well, and we were pretty fortunate to really work really well at the end of the game to make a difference and win.”

Klein praised Richardson’s grit in net for Hastings. “We weren’t making the game very easy for ourselves, and he was our he was our backbone. He was the foundation today that, you know, this game could have been 3-2 them after the second and it was 2-1 us because of his work.”

The Raiders will host Park of Cottage Grove Tuesday night, November 30 and then host Farmington on Thursday, December 2. Both games at 7:30. A week later, on December 9, they travel to Tartan for a 7:00 game and then to Aldrich arena to take on Hill Murray at 7:00 on Saturday, December 11.

Stoffel talked about the rivalry game coming up Tuesday against Park of Cottage Grove.

“We’re stoked, you know, Cottage Grove. It’s been our biggest rival all our lives and the varsity team, quite frankly hasn’t beaten them in six years. We’ve either lost to them or tied them. So, that’s just gonna come to an end Tuesday night.” 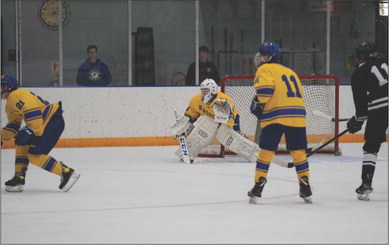 Head Coach Matt Klein praised Goalie Holden Richardsons play stating that Richardson kept the Raiders in the game when they were not playing their best.Photo by Bruce Karnick