Taken as a whole, the English Language Arts and Math scores at Stanley-Boyd show a majority of students with at least basic skills and a considerable
News
Stanley-Boyd report card in from Wisconsin DPI

Report cards are in for last year’s learning at Stanley- Boyd and the results are somewhat mixed.

Released on Tuesday November 16, the test re- sults are a first look at how the district fared learning wise during the pandemic era and its realities.

While advising caution in interpreting results based on the effects of the Covid pandemic on students learning and stress levels, the general outcomes, are as follows.

Stanley-Boyd Middle School comes in with ‘sig- nificantly exceeds expectations' and an overall score of 85.4, which—it should be noted—is not equivalent to a letter grade.

Coming in next with ‘exceeds expectations’ and an overall score of 78.5 is the elementary school at Stanley-Boyd.

Coming in the final spot with 'meets expectations' is the Stanley-Boyd High School with an overall score of 67.7, which—it should be renoted—is not equivalent to a letter grade. District Superintendent Jeff Koenig had more to say from the November school board meeting regarding the otherwise poor high school average in comparison, due to an ACT exam from the previous year.

Speaking of Stanley-Boyd, Koenig said the over – all state rankings were 'pretty well broken down by socioeconomic status,” but that, “we don’t let that be an excuse” for test outcomes at Stanley-Boyd. The Stanley-Boyd School district has 53.5 percent of its 1,092 students classed as “economically disadvantaged” according to the numbers. Koenig also said the district spends a great deal of time on ensuring early literacy, as being able to read starts to have an increasing affect on outcomes as students grow older.

Moving into growth for the past school year, Stanley- Boyd’s language arts score at the elementary level was 60.3, compared to a statewide average of 66.0. For mathematics, the growth score was 92.6, compared with 66.0 for the statewide number.

Moving into target group outcomes (the phrase ‘target group’ referring to historically underserved or underrepresented populations of students), the

number proficient or advanced, in spite of challenges to instruction from Covid last year. Results from the Wisconsin Department of Public Instruction (DPI) report card for Stanley-Boyd. TEST RESULTS

overall achievement score for Stanley-Boyd was 23.6, with growth at 70.8, chronic absenteeism at 95.0, and attendance at 95.2. A high “chronic absenteeism” is calculated as 1 minus the actual chronic absenteeism rate, meaning the percentage of students who missed more than 10 percent of school days. Put into this context, a higher score is actually better.

As to being on track for graduation, the S-B Elementary stood at 91.0, with school-wide attendance at 96.0 compared with a statewide average of 95.0 and 3rd-Grade Language Arts for Stanley-Boyd coming in at 68.9 as compared to 58.9 statewide.

Moving from elementary to middle school, meanwhile, the report card shows Stanley-Boyd with a score of 72.8 in English Language Arts, a full 10.4 points above the state average of 62.4.

For target group outcomes, the achievement score was 21.0, growth measured at 81.2, chronic absenteeism was 97.9 and attendance was 95.8. As to being on track for graduation the numbers were as follows: For overall score the number was 93.2, with school wide attendance at 96.9 as opposed to 94./7 statewide and an eighth grade mathematics score of 75.4, as opposed to 55.3 statewide. So what about high school outcomes?

Lower, as an overall score. That was largely due to a single value, as district ACT scores, hadn’t been that great last year—and there was a reason for that, not necessarily tied to academic abilities.

"The first day the juniors were together was on ACT Day,” Koenig said, calling it “poor planning” on the district’s part. The 2020-21 school year had seen the district use a hybrid schedule with the state not requiring the ACT test due to COVID, meaning that while Stan- ley-Boyd made sure the ACT test took place the schedule as such hadn’t been all that conducive to test concentration. The result was a 22nd place finish on ACT test scores compared with other districts in the area, and this affected the overall high school showing.

On a more comprehensive comparison and note of pride, meanwhile, Stanley-Boyd Schools ranked 6th overall in comparison with other area districts competitors, while its chronic absenteeism score was 88.9 among target groups and 93.9 overall, as opposed to 81.5 statewide.

"Milwaukee tends to skew the state num bers,” Koenig said of the state average for dis- trict results, due to size. 'Skew' in statistical terminology, meanwhile, is when one value or set of values produces an outsize effect on the data set as a whole, thereby 'skewing' results in a certain direction.

Another factor in statistical changes from year to year on a more local level was smaller class size. If a given district had one building for its k-12 program and small individual classes, poor performance on the part of a few or more students meant that district averages for that class or cohort could be more greatly affected than at schools with an overall larger student body to draw from. As to the overall rankings, they are listed on the district website, as well as above.

Stanley-Boyd ranked 6th overall amongst the above school districts in recent test results released by the Wisconsin Department of Instruction. Test results posted in November board agenda. 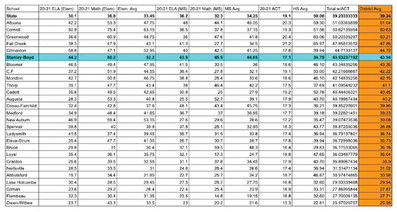