For something that’s called a ‘worksheet,’ the Environmental Assessment for Mississippi Dunes is pretty hefty. How hefty?

A lot. First though, the basics.

Starting November 29 and running through December 29, residents wishing to review and comment on the Environmental Assessment Worksheet (EAW) for Mississippi Dunes as such may do so at www.cottagegrovemn. gov. A link is provided in the lower right hand corner to view the EAW. Written comments can then be submitted to Senior City Planner Emily Schmitz at [email protected] gov or mailed to: City of Cottage Grove ATTN: Emily Schmitz 12800 Ravine Parkway South Cottage Grove MN 55016. As a part of the review process, the EAW document will also be released to the various state agencies such as the DNR and PCA, otherwise known as the Pollution Control Agency. Once the 30-day public comment period is over, the responses will be tabulated and a decision made based on the EAW of whether to do an Environmental Impact Statement or EIS, the next step in review should it be deemed necessary. But what’s in the report?

Soils and rocks, for one. Made up of eleven separate parcels, the former golf course with adjacent property is proposed to be developed in four phases (page 10) being in the spring to summer of 2022 and finished by 2025. The site, moreover, is overlaid by anywhere from 7 to 18 feet of soil before striking bedrock (page 15). The bedrock beneath the soil as identified through boreholes is limestone “classified as heavily weathered,” meaning in practice that the auger used to make the test borings was able to penetrate into the bedrock “a couple feet in most locations.”

Moreover, “groundwater was encountered from two to 19.5 feet below the surface in the eight of the test borings, or just over onethird of the 23 test boring locations total on site. The presence of shallow limestone near the riverfront “is expected,” while the groundwater was closest to the surface near the wetlands on the north end of the site. The presence of groundwater leads to a recommendation within the EAW, “that sump pumps be utilized temporarily to dewater the construction area,” with the understanding that standing water is a hazard on site, as made clearer below.

Soils types in the area to be developed, meanwhile, include Sparta loamy sand, Copaston loam, Richwood silt loam, Lindstrom silt loam, Dickman sandy loam, Chaska silt loam, and Brodale flag loam. Of these, all soils but the Chaska silt loam are designated as “non-hydric” (a term related to water-bearing capacity) so that in order to limit karst effects elsewhere a “significant portion of the stormwater ponding” is concentrated in the Chaska silt loam, deemed “hydric.” So what’s karst?

Reaching outside of the EAW for a definition, karst is defined at mngeo.state. mn.us as, “an efficiently drained landscape that forms on soluble rock, typified by caves, sinkholes, and other landforms.” The same state website goes on to say that karst “is mainly, but not exclusively formed on limestone.”

Taking that and simplifying a bit, “Karst” rock is rock that can be dissolved in water (i.e. is “soluble”) and is near the surface or overlaid by nothing save a thin soil cover. Close to the surface with thin soil, karsttype rocks can erode from simple rain as potentially forming Carbonic Acid (H2CO3) with karst, leading in turn to the potential dissolution and carrying away of formerly solid “terra firma.”

Due to the nature of karst rocks, the South Washington Watershed District requires that areas with active karst be identified, the closest identified feature being in a field by the railroad further north, per Figure 14 of the EAW.

Back on the Project Area site and because limestone can dissolve in water so that standing water poses a potential hazard, barriers will be put in place on stormwater ponds to prevent erosion. In order to prevent impacts to “potential karst features” such as the limestone bedrock, the EAW states that stormwater storage or treatment areas are to be located in areas with adequate separation to the bedrock, or if this is not possible, the use of pond liners and other methods “that create a barrier between standing water and the limestone formations.”

Described on page 16 of the EAW as “generally flat with some areas of rolling/hilly topography,” the former golf course and surroundings that form the Project Area “will need typical sub grade preparation” to be developed, defined as including “removal of existing vegetation, topsoil existing fill, buried topsoil, swamp deposit soil and any soft or loose soils identified as part of the subsurface exploration and evaluation.” With an estimated cut and fill to meet building elevations on site ranging from “approximately 5 to 10 feet from existing grades” as based on what is termed the Preliminary Geotechnical Evaluation Report, “there is an estimated 450,000 cubic yards (CY) of grading and/ or excavating for the development of the Project. With Best Management Practices to be used for a Stormwater Prevention Pollution Plan on site as a condition of a National Pollutant Discharge Elimination System (NPDES) Stormwater Construction Permit, yet to be applied for. So what’s it all mean, in plain English?

Glad you asked. The prospects in part of what’s to come should the application go through as expected are on page 10 of the EAW.

From an area before development of 4.4 acres of impervious surface, the acreage after development is projected to be 47.8 acres.

From an acreage before development of zero listed acres for Open Space/Natural Area, the acreage after development for same will be 27.8 acres.

From a lawn/landscaping acreage before development of 138.7 acres, meanwhile, the post development acreage will be 73.3 acres.

From a stormwater pond acreage before site development of two acres, the acreage after development will be exactly seven acres.

Planned to take place in four phases, the construction of the planned development would begin in spring to summer of 2022, and include “full site grading” including of stormwater ponds, but also the realignment of Grey Cloud Trail South with pull of water/ sewer utilities from off site and beginning road installation “of local roadways to serve new homes.” Completion of Phase I, meanwhile, is anticipated to be complete by fall to winter of next year, or potentially less than a year away.

Public comment on the Environmental Assessment Worksheet is open through December 29 at www.cottagegrovemn. gov, in the lower right corner of the homepage. 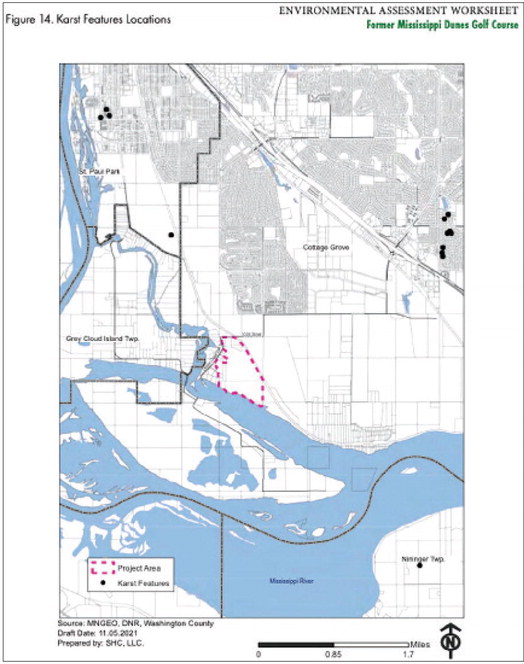 The closest active karst feature identified in the EAW is located in a field to the northwest of Mississippi Dunes. Image taken from EAW Figure 14.