Even for high school sports, graduating four starters is an unusually high number of starters to graduate in one season. That’s what happened to the RFHS boys basketball team last year, a season that ended in a WIAA Division 1 State Semi-Final game against Wauwatosa East in Oshkosh in March.

Coming into the 2021-22 season, there were some questions about a boys roster that, despite featuring five seniors in the starting lineup, had some questions about true varsity experience because of limited minutes due to a prolific 2021 graduating class. On Saturday night, Dec. 4, River Falls put those questions to bed with a decisive 60-36 victory over St. Paul Central in the season opener.

Less than 30 seconds into the game, River Falls opened up the scoring with a deep three-pointer. Two minutes later, senior Jacob Landgraf got fouled and made both free throws to take a 5-0 lead. Senior post player Ethan Campbell scored four consecutive points on inside layups to take a 9-0 lead which forced a timeout by St. Paul Central head coach Scott Howell.

St. Paul Central didn’t get on the board until eight minutes of the first half had gone by. However, once the points began for Central, they began to fight their way back into the game. After trailing 22-4 with seven minutes to go in the first half, St. Paul Central senior Gedeon Musabyimana made a three-point that got his scoring going and established an offensive rhythm.

St. Paul Central ended the final seven minutes of the first half on a 14-10 run, the only scoring run of the first half in which Central outscored River Falls. The Wildcats took a 32-18 lead into the halftime intermission.

Less than two minutes into the start of the second half, St. Paul Central began the half on a 5-0 scoring run to cut the River Falls lead to single digits. All five points were scored by the aforementioned Musabyimana. However, his one-man-army style of offense was quickly overshadowed by excellent team basketball by the Wildcats.

Despite being outscored 5-0 in the opening minutes of the second half, River Falls outscored St. Paul Central 28-18 in the second half to win the game with a final score of 60-36. The standout for the night was Campbell, who finished the game with 18 points for the Wildcats. His ability to control the post, score efficiently and grab rebounds was a highlight for River Falls in the blowout win. After the game, head coach Zac Campbell spoke about the victory and Ethan Campbell’s performance.

“We’ve got a really inexperienced group of seniors, so for us, it’s not about being what last year’s team was, it’s about forming our own identity,” Zac Campbell said. “Ethan (Campbell) is the guy that has some experience for us, so we need him to step up and be a leader. That will be a goal for him. Tonight, you saw his length and athleticism.”

Senior forward Michael Schurman had nine points for the Wildcats. He contributed offensively with a couple of assists, as well as defensively with rebounds and steals that led to easy transition buckets for River Falls. After the game, coach Zac Campbell spoke about Schurman.

“Michael is our guy that we need to have consistency out here,” Zac Campbell said. “He is just a phenomenal athlete who does a lot of things on the basketball court for us. He’s going to take on the toughest matchup (defensively) every game and will be asked to do some scoring for us. That’s a tough task, but he’s a guy that’s capable of doing it.”

Perhaps the biggest challenge for River Falls was defending Musabyimana, who finished the game with 20 points for S. Paul Central and was selected as preseason player of the year in their respective conference. Zac Campbell spoke about the challenge of defending such a dynamic player.

“He was their leading scorer last year, so we knew we were going to have a tough task with him,” Zac Campbell said. “His first step is so quick, and he elevates on that jumper to a point where we can’t get to it as a team. For us, it was about containing him and getting him off of the three-point line and make it tough, because he was going to get his.”

The win against St. Paul Central was a signature win for River Falls in its season opener. Central was picked to win their league this year and River Falls beat them by more than 20 points in the first game of the year. Zac Campbell reflected.

“We just played a team that was the preseason pick to win their league and we just beat them by 20 on our court with a whole lot of guys who saw their first varsity minutes ever,” Zac Campbell said. “While we’ve got things to clean up, that’s a good start for us.”

A good start it was. River Falls improves to 1-0 for the season and gets valuable game experience for young players in non-conference action before Big River Conference games get going. River Falls has its first BRC matchup on Tuesday, Dec. 7, on the road against Hudson in a classic rivalry game. That game will begin at 7:15 p.m.

River Falls senior forward Michael Schurman makes a contested layup early in the first half in the season opener against St. Paul Central on Saturday, Dec. 4. Photo by Reagan Hoverman

Senior post player for the Wildcats, Ethan Campbell, spots up for a corner three-pointer during the 60-36 blowout victory at home against St. Paul Central. Photo by Reagan Hoverman 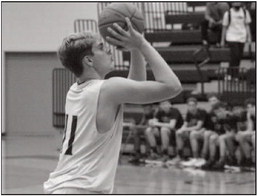