River Falls girls basketball head coach Ian Sticht speaks to his team during a timeout in the second half against Hudson. Sticht and the Wildcats pulled off the upset against the then-undefeated Hudson Raiders. Photo by Reagan Hoverman
News
UPSET ALERT:

With the way that the River Falls girls basketball team had performed in the Thanksgiving Tip-Off Tournament in Red Wing, a two-day event that featured two River Falls losses, it was hard to imagine how the Wildcats could compete against the then-undefeated rival Hudson Raiders only six days later.

There is a good chance that every Raiders fan that made the trip to River Falls was expecting a Hudson blowout victory and more than a few River Falls fans were probably thinking the same thing. However, Ian Sticht’s Wildcats came out in front of a rowdy home crowd and played their best game of the year.

The first half got off to a slow start for both teams. Five minutes into the game, Hudson led 6-0. That’s when River Falls scored its first points of the night. RFHS junior Ella Peters hit a deep three to put River Falls on the board and cut the Hudson lead to three. Hudson junior guard Grace Lewis immediately responded with a three of her own from the top of the key to make it 93 in favor of Hudson.

After making a free throw and getting a defensive stop, River Falls sophomore guard Lilly Burke hit a corner three in front of the River Falls students’ section, which promptly exploded in celebration as River Falls only trailed by two points (9-7) with 12 minutes to go in the first half.

A few minutes later the game was tied 9-9. That’s when Peters hit another three for River Falls to take a 12-9 lead. On the ensuing Hudson possession, Lewis answered with a three of her own to make it a 12-12 ball game. The remaining seven minutes of the first half were played dead even, and River Falls and Hudson went into the intermission tied 19-19.

Nearly the entire game was played with either team within three possessions of the other. Neither team could establish any significant scoring run to jump out to a big lead. With five minutes left in the second half, River Falls led 35-34. After a missed shot by the Wildcats, Peters grabbed an offensive rebound and made the layup to take a 37-34 lead. Less than 60 seconds later, Burke made a tough driving layup for River Falls that gave the Wildcats a 39-34 lead.

After a Hudson free throw, River Falls sophomore post player Jordan Schwantz made a nice post move to create space and scored on a layup to give River Falls a 41-35 lead. The feeling in the gym was that the game was hanging in the balance and that another score by River Falls could potentially seal the game for the Wildcats’ first win.

That’s when Burke came down the floor and hit a threepointer dagger from a few feet behind the arc to give River Falls a 44-35 advantage with under three minutes to play in regulation. Hudson tried to battle back, but the nine-point advantage was too much to overcome. River Falls defeated Hudson 46-41 to win its first game of the year. As soon as the final horn sounded, the River Falls students section rushed the floor as Hudson players hung their heads and the officials ran to the locker room. Immediately after the game, head coach Sticht spoke about the win.

“I certainly think the gym being so full of energy and so packed was a huge factor,” Sticht said. “I think we started on a great note and got some stops early that gave us some confidence early. We continued to make some plays down the stretch, Jordan Schwantz in that second half continued to finish around the basket and make some big shots for us.”

Schwantz was the deciding factor in the second half for River Falls. She finished the game with 13 points, 10 rebounds, two assists and three steals. She also played a clean game and didn’t turn the ball over. Sticht spoke about her performance.

“She played really well tonight,” Sticht said. “I think she needed some confidence, and she gave herself a lot of second-chance opportunities and then finished a lot of those or got to the free throw line. That’s what she’s capable of, so we hope to continue to see that as the season goes on.”

After the game, Schwantz spoke about what it was like to beat Hudson and how the win can propel the team forward this season.

“My team really helped me out,” Schwantz said. “I was struggling a bit before, but it was nice to get back into it. I had a feeling about tonight. Everyone was nervous (before the game), but I had a feeling. (The home crowd) helped a lot, they helped so much, and it was so nice to have. Getting the first win of the season was good, especially against Hudson. We needed something to turn this season around and I think this was the game.”

Sticht said that part of the reason he believes his team played so well is because they got the offense going early, which gave defensive confidence and helped keep the game close the entire way.

“I think when the ball goes in the basket it gives us more energy defensively,” Sticht said. “It gives us confidence and pretty much the entire game it was a two or three-possession game. I think when we’re in the game it’s a lot easier to stay high-energy and be involved and make big plays.”

Sticht stated that although there are a lot of positives to take away from winning a big conference game against rival Hudson, there are still areas to improve, especially with a sans-senior roster that has limited varsity minutes.

“I think we’re young and still made some bad fouls,” Sticht said. “Learning and understanding situations. Sometimes you just need to give up a layup, you don’t need to try to block every shot. But those things will come.”

Other notable performances for the Wildcats include Peters, who scored 15 points, grabbed 10 rebounds and shot 3-4 from the three-point line. Burke off the bench also had 13 points and tallied two important three-pointers that swung the momentum in favor of the Wildcats.

The next game for the Wildcats was on Tuesday, Dec. 7, at home against Ellsworth. That game was slated to begin at 7:15 p.m. 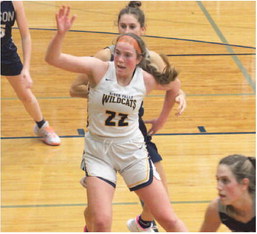 River Falls sophomore post player Jordan Schwantz calls for the ball in the post against a Hudson defender late in the second half of the 46-41 victory against Hudson on Friday, Dec. 3, in River Falls. Photo by Reagan Hoverman