The untouched trail from Jaycee park to Levee Park along the Mississippi River was a beautiful sight to see.Photo by Bruce Karnick
News
First major winter storm of the year dumps 12 inches in Hastings

It’s Minnesota, in the winter, we get it, it’s going to snow. The National Weather Service issued a warning to the area for a major snowstorm that was going to hit on Friday. This warning prompted school officials to issue an early release for students. That decision was made a day ahead of the pending snownami that was expected to dump 6-12 inches of the white fluffy stuff in the region. The fear was that the students that live in the rural areas are at higher risk of an accident and or getting stuck in a ditch or snowdrift somewhere that no one would find them quickly, or that the buses on those same rural roads would have an issue.

While the storm rolled in later than expected, it still rolled in and dumped a significant amount of snow in a short period of time, and one point, the cell stalled over most of the area for several hours dumping as much as two inches of snow per hour. At the home office near 19th Street and Pine Street, I measured anywhere from 12-14 inches, others confirmed the 12+ inch mark as well. Some readers were reporting as much as 19 inches on their property.

Anytime there is a snowfall of two inches or more in Hastings, a snow emergency is declared, and all vehicles need to be parked off the street until the road is plowed to the full width. This year, the city has decided to stop using a service called Nixle for snow emergency notifications. A decision that left many people disappointed. Now it is entirely on the vehicle owner to make sure that vehicles are moved off the street if the snow reaches two or more inches.

With this significant amount of snow that fell Friday into Saturday, city crews worked extremely hard to clear streets, but it was not a quick process. According to the City of Hastings, the official depth was 12 inches of snow. The Public Works Department crews logged more than 1,000 miles with six dump/plow trucks on Friday and Saturday.

Friday, all six trucks were on the road until 6:30 p.m. at which time five called it a night and one stayed on working the major roadways until 10:00 p.m. The six trucks reappeared Saturday morning at 4:00 a.m. and worked until 5:00 p.m. Along with the six trucks, two loaders, two tractors and a one-ton pickup were used to clear approximately 100 cul-de-sacs, city properties including the ice arena parking lot, the trails and the roadways in Hastings.

Monday, trucks were busy working with the loader and snowblower clearing piles of snow from downtown and delivering that snow to the parking lot at Lake Rebecca. Each of the six trucks were estimated to have made over 20 trips to dump just for the immediate downtown area. They will be working on removing snow from the cul-de-sacs during the rest of the week to ensure they have room for future snowfalls. 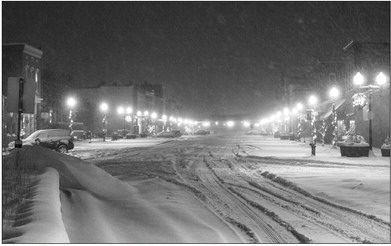 What a difference roughly six hours makes in this view down Second Street toward the Highway 61 bridge. Even with the few times this area had been plowed there was still significant accumulation in just six hours. Photo by Bruce Karnick 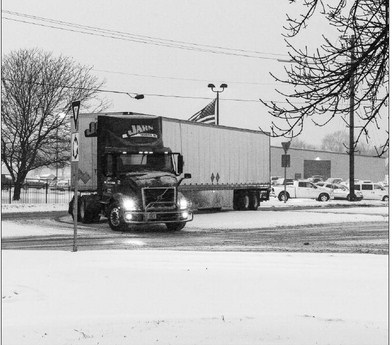 This semi made it through the new roundabout on Hwy. 316 early enough in the snowfall that he had no issues navigating the small space. Later, the MnDOT did make it out to plow the roundabouts to help with this sort of turn. Photo by Bruce Karnick