Longtime nurse Jon Mitchell (left) sets down his bag outside the emergency room doors at Aspirus Stanley last week as Police Chief Lance Weiland looks on. Mitchell chose to walk rather than receive a company-mandated covid vaccine, with many supporters of Mitchell showing up for the occasion as well.Photo by Joseph Back.
News
Longtime local nurse walks rather than receive mandated Covid vaccine Personal conscience, company policy come in

A longtime local nurse employed until last week by Aspirus Stanley, has chosen to walk rather than be vaccinated against COVID-19, in what he says is a matter of personal conscience.

Jon Mitchell, hired in the summer of 1996 by what was then Victory Medical Center, walked from the doors of Aspirus Stanley on Tuesday evening at 6:07 p.m., to a waiting crowd of supporters gathered outside, who had also watched him walk in minutes earlier. Stanley Police Chief Lance Weiland and Sergeant Adam Kuechenmeister were on site near the emergency door entrance to keep the peace, with Kuechenmeister seen to shake Mitchell’s hand before the nurse walked in.

Minutes after entering the emergency room doors, Mitchell re-emerged, holding a bag and addressing his supporters.

“I love you guys,” he said, taking off a mask he had donned while inside the building.

Empoyee vaccination at the local hospital started soon after the vaccines first rolled out and while the building was still known as Ascension Our Lady of Victory. The more recent national trend towards employee vaccination is based on two separate mandates, one called the CMS mandate that affects healthcare workers and another from OSHA that appliees ot applying to businesses with 100 employees or more.

Mitchell said that his own situation was related to the CMS mandate. “They’re the guys that control Medicare and Medicaid,” he explained.

The CMS mandate requires that all health- care workers be vaccinated, the first shot by De cember 6 of this year, and the second by January 4, 2022. It does not allow for regular testing in place of vaccination.

CMS stands for Centers for Medicare and Medicaid. Although the CMS mandate was halted when Mitchell walked Tuesday, many businesses are proceeding as usual while things play out in court.

Regional Communications and Engagement Lead for Aspirus Renee Brown released a statement giving the healthcare provider’s position on the matter.

“Aspirus supports widespread vaccination as the best protection against COVID-19 infection and serious illness,” she said. “To provide the safest environment for our patients, families, staff and community members – many of whom may have existing health issues – we fully implemented our internal COVID-19 vaccination program. The vast majority of our employees voluntarily received the vaccination, as they have seen firsthand the tragic impact of the on going pandemic. Aspirus encourages all who are eligible to get vaccinated.”

For Mitchell, it came down to a matter of choice, as he said that hospital officials had wanted him to make a “voluntary resignation.”

"I ask myself what the definition of 'vol untary’ is,” he said as he shared that he didn’t want to get vaccinated but also didn’t want to abandon his patients and those who depended on him. Showing up to work then put the decision into the hands of Aspirus as to whether they would or wouldn’t take him as willing to work, though unvaccinated.

Mitchell also questioned the time and testing related to current vaccines, though not their effectiveness. He also cited the Bible passages of 1 Corinthians 6:19-20, Matthew 13:11 and 1 Corinthians 3:16-17 in support of his decision, saying these things were spiritually discerned. At the same time, Mitchell said of the claim to a religious exemption that, “I don’t think it’s a doctrine of any church.”

Mitchell shared further that he had based his rejected claim on 21 USC 360bbb-3, a section from Chapter 21 of the United States Code being put forward in some quarters as a basis for an exemption from vaccination.

Mitchell said that his claimed exemption was denied while others were not, with the standing of a given claim often dependent on court precedents. Held in the balance generally are personal conscience rights alongside a company’s right to make workplace policies that employees are expected to abide by, or else face the consequences.

As to the events of Tuesday, Mitchell said that other hospital employees who were denied exemptions received vaccination after their denials.

Following his termination and regarding to the days ahead, the Stanley-Boyd Class of 1991 graduate who went to nursing school in Wisconsin Rapids said that, “I’m going to look forward to celebrating Christmas and the holiday with my family,” taking time to process the end of a 25 1/2 year nursing career that began at Victory Medical Center off Fourth Avenue, ending last Tuesday on Pine Street at the new hospital location as of 2004. 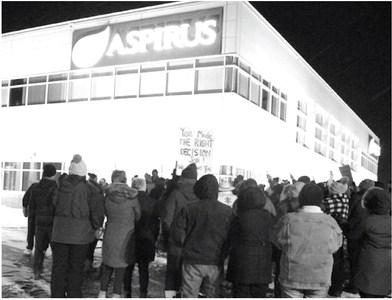 Supporters of longtime nurse Jon Mitchell gathered outside Aspirus as he came in Tuesday after declining a company-mandated Covid vaccine on professed personal conscience grounds. Photo by Joseph Back.