OTHER ITEMS OF INTEREST INCLUDE CITY PARK FEE UPDATE, REAPPOINTMENT OF BOARD MEMBERS

Going into the meeting for December 15, the Cottage Grove City Council was due to address many important items. Among those items in the consent agenda to be passed by a single Council vote, were the following:

• A water town antenna lease at Inwood/Highlands for Verizon

• Approval of rental licenses for properties rented out by the owner

• An update to language in the Health Care Savings Plan “for employees in the Non-represented pay plan since 2006,” along with adding Juneteenth as a holiday in the city.

• A new agreement for prosecution services with Joe Taylor of the Taylor Law Firm to replace the current three-year one which is expiring • The renewal of licenses for establishments selling intoxicating liquors, along with tobacco and massage therapists/businesses.

• Adopting Resolution 2021-064 “authorizing staff to sign the Memorandum of Agreement with the State of Minnesota related to the opioids settlement.”

• The approval of a Master Site Plan for a warehouse complex on Ideal Avenue, with a rezone from Ag Preservation to I-2 General Industry With fourteen items and one vote, that’s a lot to take in at a stretch—but then, it’s what consent agendas are made to handle. Details for each of the items are in the packet. Here’s a summary of four.

Starting out the four item survey is the North Point Development, with the Council reviewing a Master Site Plan and a series to resolutions to change the zoning for 252 acres of land from AG-1 Agricultural Preservation and AG-2 Agricultural, to I-2, General Industry. Along with the zone change would come a Planned Use Development or PUD, which allows for flexibility in certain zoning details, like lot size, with the site as a whole to comprise approximately 3.4 million feet of warehouse space when finished.

If approved, the Master Site Plan for the North Point Development site off 100th Street South would include an interfund loan via TIF, or Tax Incremental Financing District No. 1-20. This would follow upon a public hearing for said TIF District. Mayor Bailey shared more on the development via Facebook.

“The City Council will be reviewing the planned proposal for the North Pointe Development in our Business Park this coming Wednesday!” Bailey wrote as of Monday. “This development will be one of the biggest business developments in the State of Minnesota and provide good paying jobs and significantly expanding our tax base! More to come in the near future on the tenants! (I know a lot of people are wondering who is coming in here! – We know who is on the list – but not specific to Cottage Grove yet!)” the Mayor shared.

The next item of interest on the Council’s consent agenda from December 15 is a memo from Steve Dennis, Chairman of the Board for the Cottage Grove Convention and Visitors Bureau. Established during COVID, the Convention and Visitors Bureau had to tighten its initial budget. Of note Wednesday, however, is the re-appointment of current board members on the fledging entity. Dennis explains more in the background section of the Council memo.

“The Cottage Grove Convention and Visitor’s Bureau (CGCVB) has a Board of Directors of seven individuals that must be approved by a majority vote of the City Council,” Dennis writes. “The terms of the directors shall be for three years except for the terms of the initial board, which was staggered.”

With further stipulations including that the Bureau have one person “from the major hotels in the City,” three City of Cottage Grove Representatives (defined as a Council member, EDA member, and or City Staff “or other person” as determined by the Council), Dennis makes his recommendation: reappointment of Council member Justin Olsen as the Board Vice Chair, along with that of Christine Costello from the City Staff as a board member, and the reappointment of Laurie Levine from the Chamber as a board member also.

The three, whose terms began on May 6 of 2020 and were extended to December 31, 2021 on account of COVID, will be staggered in their new terms, with the terms of Olsen and Levine expiring in 2023 and that of Costello in 2024. Costello is also the City’s Economic Development Director.

Thirdly of note in the consent agenda for December 15 is a Memorandum of Agreement with the State of Minnesota on an Opioid Settlement.

By signing on to the agreement, the City will be adding its voice to opioid litigation settlements, while also demonstrating solidarity in a problem that extends far beyond Cottage Grove and “maximize Minnesota’s share of opioid settlement funds,” so as to “ensure needed resources reach the most impacted communities. With a set of five “WHEREAS” clauses followed by a “NOW, THEREFORE” according to the structure of the annoncement, the City of Cottage Grove is signing on to fight the harm done by opioid use.

Fourth and last in this brief summary from the December 15 Council consent agenda, is an update to the city fee structure, including that related to park dedication .

“Historically the City has used the formula below as a guide in assuring fees are relative to the market,” Parks Director Zac Dockter shares in a memo on park dedication fees, then sharing the math: Park Dedication Fee = $Land Value/Acre / 2.5 units per acre x 10 % Recognizing that parks aren’t free and need to be funded along with increasing cost of product and labor” across all industries, Dockter puts forth the following.

“To maintain our commitment to providing quality park experiences, staff would recommend raising the park dedication fees approximately 20% across all categories, he shares, then getting down to what this would mean.

For a Single Family Dwelling, Park Dedication fees would be $4,000 per unit, while for Quad Buildings it would be $3,050 per unit.

The proposed fees would constitute anywhere from a $290 price hike (for Multi-Family Independent Senior Living), to $600 (for most others) and $1,000 (for commercial and industrial acreage). The park dedication fees, if approved, would seek to cover a projected 15 to 20 percent of projected increased costs in the recreational industry for the period of 2020 to 2022.

More can be learned at www.cottagegrovemn.gov, under “Your Government,” followed by “Agendas and Minutes” under the “Mayor and Council” subheading on the left. 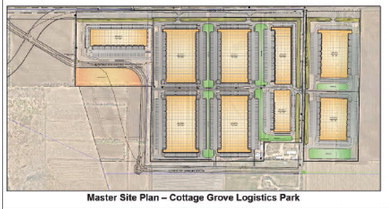 Contained in the Council packet for December 15 is this Master Site Plan for what would be known as the “Cottage Grove Logistics Park.” Set to be located south of 100th Street South, the site will include approximately 3.4 million feet of warehouse space. Staff recommendation was to adopt Resolution 2021-168 approving the Master Site Plan. Image from December 15 Council packet.