With wins against Altoona on Tuesday, Dec. 14, and Somerset on Friday, Dec. 17, the Prescott boys basketball team improved to 7-0 for the season, including a 4-0 record in Middle Border Conference play which puts them alone atop the standings.

A standard of excellence has been established in Prescott by the boys basketball team under the direction of head coach Nick Johnson. The 7-0 hot start to the season has put the Cardinals in the driver’s seat in the Middle Border Conference, and in position for their first conference title since 2019-20.

The Tuesday night game against Altoona was essentially decided in the first half. Prescott outscored Altoona 3922 in the first half, in large part due to Aiden Russell’s offensive explosion which propelled Prescott into a huge halftime lead.

Russell’s first half was the best 18 minutes of basketball that he’s played all season. He was doing it all. He crashed the glass offensively, grabbing multiple offensive rebounds, putting them back in for layups, and occasionally getting fouled in the process. When defenders slacked off to protect the paint, he buried a corner three-pointer to keep them honest. Russell went into the halftime intermission with 17 points and was the dominant performer in the first half. After the game, head coach Johnson spoke about Russell’s performance.

“Aiden Russell, number one, we see that in practice all the time,” Johnson said. “So it’s like, if you’ve watched us so far, it’s like, ‘Oh my gosh, Aiden Russell showed up.’ But we see that every day. He came in here tonight like he was showcasing himself. We need that from him every game. Sometimes he disappears and he’s one of the best athletes I’ve ever seen. Getting that big-time production is a bright spot.”

The Prescott lead was too much for Altoona to overcome. The Cardinals cruised to a 7850 win to improve to 6-0 for the season. After the game, Johnson spoke about how many ways his team is capable of beating another team on any given night. He has stated in the past that he has seven guys that can score 15-20 points on any given night. Through the first seven games of the season, that has been on full display, with high-scoring nights from Jordan Malmlov, Dallas Wallin, Brandon Stuart, and the aforementioned Russell.

Russell finished with 24 points, Wallin finished with 17, and most importantly, Prescott won a game that was never in jeopardy of being lost. Johnson spoke about his team’s offense.

“We can hurt you in a lot of different ways,” Johnson said. “I was glad in the second half that we made a point to get the ball in the paint more and Dallas (Wallin) shows up and scores 12 points quickly. We’re playing very well offensively.”

“Yeah, especially because we’re not going to be the tallest team out there, but we are going to be one of the most athletic,” Johnson said. “We can get rebounds just by being athletic.”

The Friday night game against Somerset was the closest game that Prescott has played all season. The road conference game was a 12point win for Johnson’s Cardinals. After outscoring Somerset 31-12 in the first half, the Spartans outscored Prescott 34-27 in the second half. The halftime deficit was once again too much for a Prescott opponent to overcome. Coach Johnson spoke about being ranked in the state for Division 3.

“That’s a credit to the kids,” Johnson said. “I tell the kids, it doesn’t win you games or anything, but these kids have worked so hard in the offseason, it’s important that they get recognized by other coaches and other teams. It’s awesome for our kids.”

Last week, the Cardinals were ranked ninth in the state for boys basketball in Division 3. This week, they moved up to the seventh slot and are slowly making a push for the top five. The next game for Prescott is on Wednesday, Dec. 29, on the road against Irondale at the Hastings Tournament. That game is slated to begin at 5:15 p.m.

Prescott senior Aiden Russell makes a driving layup in the first half at home against Altoona on Tuesday, Dec. 14. Russell’s 24 points led all scorers in the game. Photo by Reagan Hoverman 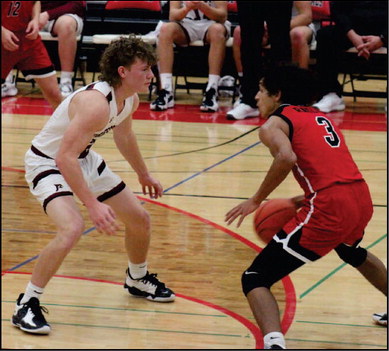