The warning came in via automatic smartphone alert Wednesday night: A storm capable of producing dangerous winds was developing, including a tornado watch. SEEK SHELTER NOW!

Later becoming a tornado warning and shared to the Stanley Republican Facebook page as such at 9:12 p.m., the fury touched down at the corner of Highway G and 40th Avenue minutes later, at 9:15 p.m. Tracking northeast and cutting a swath of destruction along a path just un-

Baby Jesus slept through the storm unmoved Wednesday night as chaos rained down and winds scattered the other characters in the manger scene. Photo by Erin Plombon.

Emergency responders from Stanley, Boyd, and surrounding communities were on site at the Community Center Thursday morning as Mayor Al Haas returned after helping set things up the night before. Among the responders were Village of Boyd President Bob Geist (left) and Jeff Ryba (right). Photo by Joseph Back. der seven and a half miles long before lifting at Center Road and Copenhaver Avenue seven minutes later, the out-of-season tornado of December 15 would be rated an EF2, with maximum wind speeds of 120 miles per hour. But while this would take time to determine with full visibility at dawn, the emergency services response began minutes after the storm lifted.

“So much devastation,” the Stanley Police Department posted to Facebook at 2:44 a.m. with broken heart emoji. But while things were bad in property terms, no lives had been lost or injuries reported.

“As of 2:30 a.m. we are relieved to report that the storm that swiftly swept through the City of Stanley last evening only resulted in property damage,” the department reported. “There have been no reports of any injuries to anyone as a result of this storm.” Thanking neighboring law enforcement, fire department and Emergen cy Services (EMS) personnel for their quick response, the Stanley PD asked that people in general stay home.

“Daybreak will reveal the true extent of the damages within the city but we are certain this storm will bring out the true definition of community as we begin to recover and move forward.” After things had settled down a couple of days later, Stanley police Chief Lance Weiland shared his thoughts on the police end of things.

“From the police department perspective I would call the start ‘organized chaos,’” Weiland said, saying that the department had an officer on duty at the time and he had showed up as soon as power went out. Within an hour of the storm, all five full-time officers including Weiland were present.

“Initially right away there was a lot going on,” Weiland said, saying the department’s first priority was life and death issues and making sure everyone was safe, then posting of- ficers near downed wires and dangers knowing that people would be coming out to look around. With Cadott and the Chippewa Sheriff's Office re sponding, Weiland didn’t have a complete list made up when called Monday after a day’s rest form 72 hours non-stop.

Thorp, he said, had its own power outage issues to deal with, albeit not as widespread as Stanley’s.

Following initial response by the Stanley PD and come the morning, it was all hands on deck. Along with Stanley- Boyd teachers and students helping on their day off were several local residents, who came out to help clean up. Including residents like Leon Shirk of Lublin.

“I’m from the Lublin area,” Shirk shared as he said he had heard of events when coming into work that day and also helped at Neillsville, before coming to Stanley.

“I heard about it this morning at work,” he said. “I showed up to work and heard there was a tornado up here.” Teaming up with others including a local crew from Christian Aid Ministries (“We’re from this area”), Shirk and others got to work, being led by Stanley Fire Chief Korey Hagenson and area responding departments that included Chippewa Falls, Anson, and Lafayette, but also Cadott, Boyd-Edson, Delmar, and Gilman, among others. Calling on Facebook for volunteers to show up at 8 a.m. Thursday morning at the Community Center, Hagenson shared more of how the emergency response was handled.

“Wednesday night we did not have a map or grid set in place,” he said. “I went around in my personal truck since we do not have a command vehicle and all of our trucks were too big to make it past downed trees and power lines and all of the trucks were placed in blocking locations by danger zones. Thursday morning around 02:00-03:00 am we came up with a graded map that had 15 zones in total. The zone number did not mean that it was higher priority than the next. We just started to number,” he said, “being that it was still very dark we did not know what part of town was more damaged than the next.”

Hagenson said his first concern was for the life and safety of the town’s residents, while his second was getting main roads like Maple Street and Broadway “back open ASAP.” Being that the main high electricity lines ran with those roads and were down as a result of the storm meant this was hard to do. There were also donations of food.

“We did get a donation of food from a firefighters family member and plan to give that to families in need,” Hagenson said. “I also talked to Jason Thornton from Clark County Emergency Management and they are donating food to the city for the same reason,” he shared.

When Saturday morning dawned just over 48 hours into the initial effort, the Stanley department and others were still at work. Along with the cleanup came other concerns, including a medical call at the HomePlace, and the smell of gas on 9th Avenue.

As to the other departments, assistance given included cleanup from the tornado and making sure houses were hooked up with power and heat, volunteer firemen mak ing their way through the city door-by-door.

With power back on for the most part Saturday night, it was time to head home—but not without thanks.

“I would like to thank them and all the time they took out of their daily life to come try to help make Stanley resident’s lives a little easier,” Hagenson said. 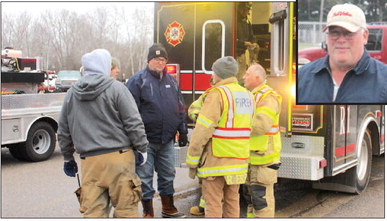