“We didn’t expect it, we thought it was going to be hard getting to $5,000 in a small community like Ellsworth,” said senior Maria Gronseth.

The students raised money to buy school supplies for students staying at the base. They began raising money at the beginning of November and started planning the project back in September. The students set a goal for how much they wanted to raise.

With that money they were able to buy enough school supplies for 1,056 refugee students. With an extra $1,114 left over, they donated that money straight to a charity called Save our Allies (SOA).

SOA aims to help populations of refugees from Afghanistan. Their mission states, “Our mission is to rescue American Citizens, Permanent Residents, SIV Holders, and other special populations from Afghanistan and help them navigate the many challenges of being a Refugee in order to form a successful and productive life in the United States.”

The students worked hard to spread the word about taking donations and what they were trying to achieve. By using social media and spreading the word at school, most of their donations were cash and checks. They also set up a GoFundMe page that raised around $6,000.

Each student felt rewarded and humbled by their experience. After raising the money and buying the supplies, the students had the chance to tour the Fort McCoy base and meet some of the refugee children that they were helping.

“We did help unpack the supplies and we got a tour of the base,” said Gronseth. “It was very eye opening and humbling. I didn’t realize how much I take this for granted and something really interesting is they aren’t forced to learn.”

“One thing that impressed me and stuck with me is that one of the school houses was cycling through around 400 students a day at one point at their max, and they all are just so eager to learn and all of the teachers are volunteers,” said Ann Lundstrom.

As most of the students in the Hearts and Minds student organization graduate this year, there aren’t any next steps for projects at the moment. Audrey Farrell being the only junior will lead a project next year if the group decides to continue.

The supplies brought included backpacks, pens, pencils, art supplies and anything else needed to prepare the children to succeed in their learning.

To see more photos from their journey to Fort McCoy, visit their Instagram page @ellsworthheartsandminds.

EHS students with the boxes of supplies ready to unpack and unload for the Afghan refugee students. Photo courtesy of Kyle Luchsinger 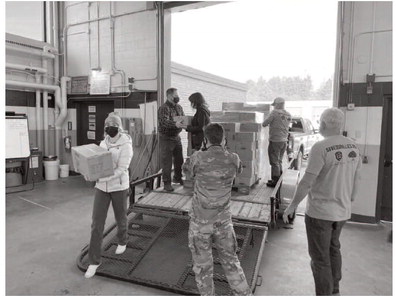 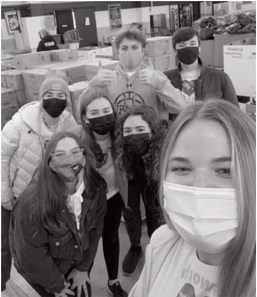