Prescott junior Katrina Budworth shoots a free throw during a game earlier this season. Budworth has been dominant for the Cardinals this season and leads the team in scoring. Photo by Reagan Hoverman
Sports
Local girls basketball roundup

More than one month into the basketball season, local teams are separating themselves from the rest of the pack as they get into the full swing of the conference schedule. Most notably, in the Middle Border Conference, the Ellsworth Panthers and Prescott Cardinals are among the top teams in the conference.

Ellsworth goes into the short Christmas break with a 5-3 record overall, including a 3-0 record in Middle Border Conference action. The Panthers have gone through a tough non-conference schedule against larger schools including New Richmond and River Falls, which account for two of Ellsworth’s three losses.

Despite playing a tough non-conference schedule, Ellsworth has had success against MBC opponents including Somerset, Saint Croix Central and Amery. Sophomore standout Molly Jake continues to lead the team to success as she leads the team in all three major statistical categories of points per game (18.5), rebounds per game (11) and assists per game (3.4).

Ellsworth will compete in the Menomonie Holiday Classic on Tuesday, Dec. 28, at 2 p.m. against Northwestern. The following day Ellsworth will play Clear Lake on day two of the tournament.

While Ellsworth has had a great start to the season, so have the Prescott Cardinals. Under the direction of first-year head coach Joan Korfhage, the Cardinals are 5-2 overall which includes a 3-1 record in Middle Border Conference action.

The Cardinals aren’t dominated by one player. Instead, Korfhage’s squad gets 15.5 points per game from Katrina Budworth, 10.8 from Isabel Matzek and 9.6 from Lila Posthuma. The diversity in scoring has helped Prescott stay near the top of the conference standings. As of Monday, Dec. 27, the Cardinals are one game out of first place. They trail only Ellsworth and Baldwin-Woodville in the standings.

The next game for Prescott is at home on Thursday, Dec. 30, when they will host the Saint Croix Falls Saints at 5:45 p.m.

The Spring Valley Cardinals are 4-3 going into Christmas break and are 2-1 in the Dunn-St. Croix Conference standings, trailing Plum City/Elmwood, Elk Mound and Colfax.

Sean Hoolihan’s Cardinals squad is coming off of a 1-18 season during the 2020-21 campaign, so having an above .500 record is a huge step in the right direction for what is a young Cardinals team.

The most recent game for Spring Valley was on the road against Somerset, a game that the Cardinals lost 73-30 on Tuesday, Dec. 21. Mara Ducklow and Halle Thomas did nearly all of the scoring for the Cardinals, tallying 14 and 10 respectively.

As winter break comes and goes, Spring Valley is in a position to compete for the Dunn-St. Croix Conference championship after coming off of a tough season only one year ago. The next game for Spring Valley is on Wednesday, Dec. 29, at home against Cumberland. That game is slated to begin at 7:15 p.m.

Elmwood/Plum City The Elmwood/Plum City Wolves are in a similar position to where the aforementioned Spring Valley Cardinals are – competing for a Dunn-St. Croix Conference championship after struggling in the previous 2020-21 season.

The Wolves didn’t struggle nearly as much as Spring Valley did last season. The Wolves finished the year with an 8-12 overall record. However, this season, the Wolves are 3-3 overall but have a 2-1 record in Dunn-St. Croix Conference play.

The most recent game for Elmwood/Plum City was at home against Stanley-Boyd, who defeated the Wolves 46-39 on Tuesday, Dec. 21. It was a community scoring effort for the Wolves, with the top three scorers being Hailee McDonough (11), Isabella Forster (8) and Maggie Glaus (9).

The loss dropped the Wolves to .500 for the season. However, Elmwood/Plum City remains in a tie for third place in the Dunn-St. Croix Conference standings. The next game for the Wolves is on Tuesday, Dec. 28, in the Clayton Tournament. The opponent is still TBD.

It’s been a tough start to the year for the River Falls High School girls basketball team. The Wildcats fell to 2-8 overall, including a 1-4 record in conference play after River Falls lost 6054 on the road against Eau Claire Memorial on Tuesday, Dec. 21.

To say that River Falls is a young team would be an understatement. The roster doesn’t have a single senior and there are only a handful of juniors on the roster. The Big Rivers Conference is notoriously tough for girls basketball, especially with Menomonie and Hudson, two teams that have been perennial powerhouse teams for years.

River Falls currently sits in seventh place of eight total teams in the Big Rivers Conference. Perhaps the most shocking moment of the entire season was one of River Falls’ two wins, which was a home game against then-undefeated Hudson. That upset victory was on Friday, Dec. 3, and was a 46-41 victory for the Wildcats.

It was one of the few bright spots this season for an extremely young team that is struggling against experienced, talented teams in the Big Rivers Conference. The next game for River Falls is on Tuesday, Jan. 4, at home against Baldwin-Woodville. That game is set to tip-off at 7:15 p.m. 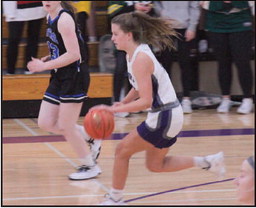 Ellsworth sophomore Molly Janke moves through open space on the floor as she looks for an open teammate to dish the ball to. Janke leads the team in all three major statistical categories, including points per game, rebounds per game and assists per game. Photo by Reagan Hoverman