In county address to city council, commissioner reports that bison will be in park by fall

Slavik said that while the COVID-19 pandemic has provided challenges for Dakota County, it has been able to maneuver through them and remains financially strong.

He pointed out that for eight years straight, Dakota County has the lowest per capita tax levy in Minnesota and boasts the lowest tax rate of any county in the state.

“We were able to approve a xero percent increase levy for 2022,” he said.

The total budget is $441 million. Two thirds of that goes to staff and county operation, one third is dedicated to capital costs.

“Next year will be our fifth year in a row of being debt free as a county,” he said.

“We ‘ve been very aggressive on our financial stewardship and to make sure we can use our dollars the best,” Slavik said, noting the budgeting process requires “a little bit of luck and a lot of hard work.”

He pointed out that the county last fall opened its SMART Center in Inver Grove Heights. The Safety and Mental Health Alternative Response Training Center offers space for law enforcement and other first responders from across the region to access crisis training. The 35,000-square-foot facility houses training space for:

Slavik said that bison are being reintroduced at the Spring Lake Park Reserve along the Mississippi River in Hastings.

“Next fall, stay tuned. You’ll be able to go along the bike trail on the Mississippi River Greenway and check out bison in our park system,” said Slavik. According to the county, the bison range project will create the infrastructure to help Dakota County responsibly manage the herd. Work involved will include fencing, gates, watering holes, a short, paved trail segment with an observation station and humane animal handling facilities. Construction will be split into two phases with the fence and gates started in summer 2021 and the balance of the work being completed in 2022.

Slavik said Dakota County provides resources and funding for 137 rooms total to help the homeless population in the county. That’s up from 87 prepandemic.

“Right now, we can say as it stands, every individual who chooses to have a roof over their heads has been given the opportunity,” Slavik said.

He said a community conversation will be held in January in Hastings to discuss helping those affected by homelessness.

“We have a very generous community that wants to help,” he said. “We know that a person can’t just have a roof over their head to be safe and stable. It’s a mental health issue, it’s a job situation, it’s a childcare situation. We’re looking to be able to find a way to make our population safe so they can ultimately thrive.” 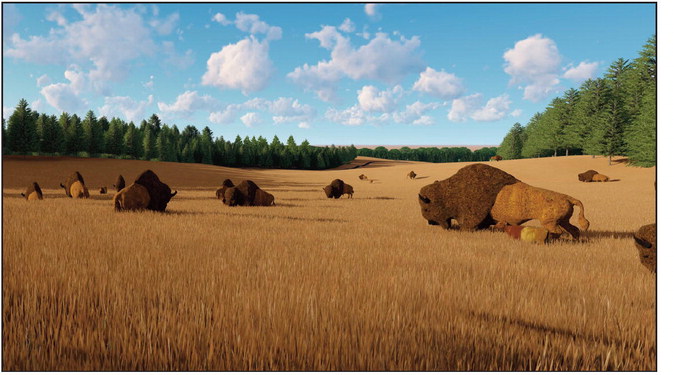 An artist rendering of bison, which will be reintroduced to Spring Lake Park Reserve by Dakota County.