The Ellsworth girls basketball team competed in the Menomonie Holiday Showcase on Tuesday, Dec. 28, and Wednesday, Dec. 29. In those two non-conference matchups, Ellsworth went 1-1 and remains tied for first place in the Middle Border Conference standings.

The opening game of the holiday showcase for the Panthers on Tuesday afternoon was against Northwestern, a game that Ellsworth lost 61-51. However, the Panthers bounced back the following day against Clear Lake in what ended as a 59-51 win to improve to 6-4 for the season.

In the game against Northwestern, both teams traded buckets throughout the entire first half. When either team went on a scoring run, the other responded with a run of their own. Going into the halftime intermission, Ellsworth trailed 23-22.

The scoring battle continued in the opening minutes of the second half. Perhaps the most important stretch of the game began with 12 minutes remaining in the second half. Sophomore star guard Molly Janke buried a three-pointer from the left wing to take a two-point lead. After came a pair of free throws from sophomore Taylor Peterson to give Ellsworth a five-point lead.

Just when Ellsworth was getting into an offensive groove, Northwestern began to heat up, especially from behind the three-point arc. Over four minutes, Northwestern had four threepointers which propelled them to a 46-43 lead. An and-one layup by junior Northwestern guard Madison Bobula gave the Tigers a five-point lead with less than seven minutes to play.

Northwestern rode the momentum to a 61-51 victory against Ellsworth, which dropped the Panthers’ record to 5-4 for the season. After the game, head coach Jason Janke spoke about the game.

“I thought our kids grew,” Janke said after the loss. “If we make some shots in the first half and shoot some free throws anywhere near where we have in previous years, I think that’s a game that absolutely goes to the wire.”

Despite struggling from the floor offensively, the game was relatively close. It was only a 10point defeat for the Panthers in a game where the other team was hitting everything they took from behind the three-point line. Janke spoke about the Northwestern shooting.

“I think they shot really well,” Janke said. “From what I saw statistically, I think that had to be their best game shooting the three, which, you know, sometimes you have that happen. I can’t fault our kids. I think we did a good job of getting to shooters. They made the extra pass and did what they had to do. I give them a lot of credit.”

The aforementioned sophomore Peterson was a highlight of the game for Ellsworth. She ran the floor effectively, made some baskets and even stretched the floor with her shooting.

“Taylor (Peterson) is doing some really good things,” Janke said. “She is learning how to run the floor and use her shooting to our advantage. She runs the floor really well off of a rebound and I think she had a couple of her baskets in transition and she’s scrappy on defense.”

“We’re still early-midseason,” Jason Janke said. “Hopefully kids like Morgan and Ava get a little more accustomed to taking care of the ball for us. Molly can’t let fatigue win, but she needs a break here and there, she’s a high school kid. She played a lot of varsity minutes and a lot of (the other girls) are getting their first varsity minutes. That’s a part of the growing process.”

At the halftime intermission, Ellsworth and Clear Lake were tied 25-25. In the opening minutes of the second half, the Ellsworth offense got into a groove that began with a three-pointer from freshman Morgan Halverson, which gave the Panthers a 28-27 lead.

A few minutes later, Peterson decided to get in on the action with a three of her own to take a 34-32 lead. After a steal by sophomore Aubrey Wittenberg, she drove down the floor, kicked the ball out to Peterson who buried her second three in as many possessions to give the Panthers a 37-32 lead.

After a couple of fruitless possessions for Ellsworth and just the opposite for Clear Lake, the Warriors had taken a 39-37 advantage with approximately nine minutes remaining in regulation. It was the final time that Clear Lake led the game. Sophomore guard Ava Brookshaw also got going from deep three-point range. She made two three-pointers in 61 seconds to take a 43-39 lead that Ellsworth held throughout the remainder of the game.

The victory improved Ellsworth’s record to 6-4 for the season. After the game, coach Jason Janke spoke about the win and how he believes it was an important one for his roster, as well as the outstanding play of Brookshaw, Peterson and Halverson, who have all developed into high-quality players.

“It was a big win, that’s a solid basketball team,” Janke said after coming out of the locker room. “Morgan (Halverson) has really changed us – we don’t have to have the ball in Molly (Janke’s) hands all the time and that’s been helpful. Taylor (Peterson), I think she was the spark in the second half. I think Taylor Peterson hit her (three-pointers) first, she got us cooking and then Ava (Brookshaw) followed suit.”

In the year 2022, modern basketball is often rewarded. Modern in terms of shooting the three and running the floor, and that’s exactly what Ellsworth did. They had players hitting threes from all over the floor, which made everything much easier offensively.

“I think we had four different kids hit threes, and that’s critical,” Jason Janke said. “When you do that, it forces people to spread their defense out. They do a really good job of playing together and understanding their roles.”

The young Ellsworth team, which features action from predominantly a sophomore class, is inexperienced in comparison to other Middle Border Conference teams. Because of that, the Panthers were picked to finish in the bottom half of Middle Border teams this season. It’s been anything but that so far, as Ellsworth is currently tied with Prescott for first place in the conference standings.

“I think there are a couple of games we’d like to have back, but overall, we have to be pleased with it, considering our relative inexperience at the varsity level,” Jason Janke said. “We’ve got a few kids that have really grown.”

He continued by speaking about his team being competitive in the Middle Border this season, and how they’re in the hunt for a conference title.

“I’d like to think we are (in the hunt),” Jason Janke said. “The preseason prognosticators had us in the lower half of the league which we’re using as a little bit of a motivator. I think we can battle. Any one of several teams could come out of this (season) with the conference.”

Ellsworth’s next game was on Monday, Jan. 3, on the road against Elk Mound. That game was slated to begin at 7 p.m.

Sophomore Molly Janke of the Ellsworth Panthers takes and makes a runner from the free throw line during the Panthers' game against the Northwestern Tigers at the Menomonie Holiday Showcase. Photo by Rea- gan Hoverman 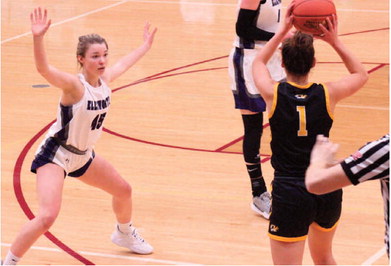