This is the eighth year in a row that Hastings has held a four-team tournament at Hastings High School and Prescott head boys basketball coach Nick Johnson has been bringing the Cardinals to it every chance he can.

“I want to say this is our seventh or eighth year in a row doing it and we love coming over here,” Johnson said. “We know we're going to be tested playing the bigger schools with us being a smaller school, but that's what we want. We want the toughest competition we can find and it’s also nice for our fans and for us being so close. We love it.”

Prescott faced a tough Irondale team in Friday’s game. The Cards trailed by six heading into half-time at 48-42, but Irondale fought back hard, at one point flipping the score to a 17-point deficit for Prescott.

“They've had a very good team, we hung tight then we fell down 17 in the second half. We fought our way back to only be down three. I was very proud of the way we played against a very good team. A very physical game where it's we're not very used to the teams we played in Wisconsin, so we lost but we took a lot of positives away from that game,” said Johnson.

Prescott did fight back and actually outscored the Knights 34-32, but ultimately lost the game 80-76. Jordan Malmlov scored 27 and Dallas Wallin put up 22.

The second night of the tournament Prescott faced the host Raiders in the third-place game. Prescott won that game 75-46 after holding a 37-30 lead at the first half.

Once in the locker room at the half, Johnson had a simple message for his team.

The size of the Cardinals proved to be troublesome for Hastings, especially in the paint. The Raiders’ game plan is predicated on transition points. Quick scores from the transition down the court and outside shooting. If the initial shots do not fall, Hastings is not going to out rebound taller teams. For the most part, Prescott towered over Hastings as they only have one starter that is over six feet tall, and he is listed at 6’1”. The other four starters are at the 5’10”, 5’11” mark.

After the game, Johnson recapped what their approach was to beat Hastings.

“Tempo,” he said. “You know we want to play fast, and so do they, we feel, if a team wants to match us in that aspect of the game, we feel we're going to have a lot of success which we did, you know. We got a lot of easy buckets against their press and against their half-court trap. We’ve got a lot of ways to beat you with a lot of guys that can score and, we just we played very well tonight.”

Prescott's Dallas Wallin drives the lane and the smaller Raider defenders were unable to stop it. Photo by Bruce Karnick

Jordan Malmlov forced a turnover near half court and had an easy dunk opportunity against Hastings in the Holiday HOOPla tournament over Christmas break. Prescott won the thirdplace game, 75-46. Photo by Bruce Karnick 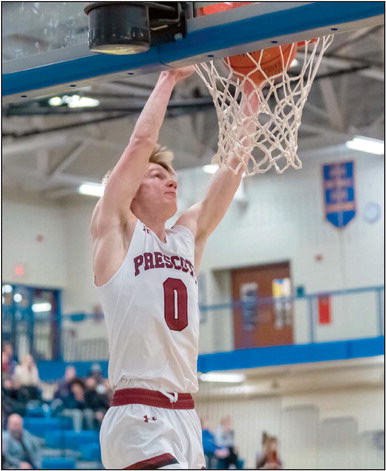