The location of the new bar and grill was sitting vacant for around eight months, according to bar owner Sabby. For many of those months, he had been trying to decide if he wanted to open a new bar in its place.

“The gentleman I went into business with a few years back said ‘Hey, this building is available. Is that something you want to do?’ and this was back in May. I said no at the time because I just had too much on my plate,” he said.

He continued, “I thought about it for a few months and he came back to me in late August and asked me again if I had any interest in opening up this place, and my other bar is doing well and is selfsufficient so we jumped into this.”

After deciding to go ahead and open the new bar, the preparation started. Sabby said they deep cleaned the space, discarded old equipment and installed new and added Final Final decor. One of Sabby’s top priorities is to make sure the bar is very clean.

“There was a deep fryer and a grill in the kitchen before and there was just no ventilation, so there was a lot to clean up after getting rid of those, and I’ve always told my staff that I don’t care how cold the beer is or how hot the food is, I want people to say that this bar was clean,” he said.

Right now, the bar is starting off with the basics and finding a routine that works well for them. The menu includes pizza and pasta, which gives them a unique edge compared to other bar menus.

“We went with pizza and pasta. I've cut right back to the basics after getting rid of some of the old equipment, but we have a very nice pizza oven. In the future once we can get a routine down we can add some other foods to our menu,” said Sabby.

In the future, Final Final wants to host more community events like Bingo, meat raffles and other extra activities to help draw people in.

“We've talked about doing Bingo and Queen of Hearts, so once everything settles down we’ll get a schedule of weekly events,” he said.

The name Final Final comes from a saying that Sabby has come across after working in the industry for many years.

“If you have ever spent time in a bar and I’ve been in the business for 27 years, literally everybody will say ‘alright give me one more,’ or ‘alright this is the final final,’ and it just keeps going on so we came up with that as the name,” he said.

Although Final Final is new to Ellsworth, Sabby has been in the restaurant business for several years and he hopes to bring his expertise to this new bar. He has owned and worked at many bars but this will be the first in Sabby’s hometown.

“I think what I’m most excited for is that this bar is the first I’ve owned in my home town,” he said.

He currently owns Sabe’s Loft in Bay City; he is excited that this new space is close to home and is optimistic about splitting his time between the two.

Final Final is planning a grand opening for sometime in February; updates will be posted on the bar’s Facebook page. 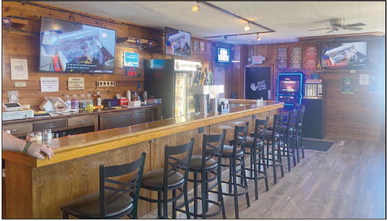 Inside the new Final Final Sports Bar located at 305 W. Main St. in Ellsworth. They serve homemade pasta and pizzas, along with a full-service bar. Photo