It was an impressive week for the River Falls High School wrestling team, which defeated Hudson in a dual for only the second time in the last nine years. The Wildcats rode that moment through their next meet at the 65th Annual Fred Lehrke Invitational, hosted at D.C. Everest High School in Wausau, where River Falls took first place out of 10 teams.

The Thursday night, Jan. 6, home dual against Hudson was a huge step in the right direction for River Falls as a program. The first match of the night was at 220 pounds when RFHS senior Vita Massa squared off with junior Ryan Rambo of Hudson. After leading 7-0 early in the match, Massa rolled Rambo over and pinned him to take a 6-0 lead in the overall team score.

team score 6-6. It was a back-and-forth kind of match the entire night. Whenever it looked like River Falls was going to pull away, Hudson would battle back into the meet.

Perhaps the most entertaining match of the night was the 113pound match between freshman Jonas Longsdorf of River Falls and junior Austin Krenz of Hudson. Longsdorf got out to a slow start and fell behind by five points in the first two periods. In the third period, Longsdorf battled back, tied the match, and managed to get it to overtime against the heavy favorite Krenz of Hudson.

In that overtime period, Krenz got the best of Longsdorf and defeated him 7-5. However, by not getting pinned, Longsdorf helped his team and saved some points in what was expected to be a quick match between the two. After the meet, RFHS wrestling head coach Kevin Black spoke about the importance of Longsdorf’s match and some of the strategy behind picking weights for his wrestlers.

“We knew that we were out a 113, so we’re going to weigh in at 106, and if they have to take the mat first, then we bump Jonas (Longsdorf) up to 113,” Black said. “He gave up a decision which was three points where it would have been six and six (if he had stayed in the 106-weight bracket.) We basically gained three points. If he would have won that match, it pretty much would have (won the dual.)” Longsdorf’s contribution, as well as solid wrestling from some other athletes, helped propel River Falls to a 40-28 victory over Hudson. After the match, Black spoke about the team win.

“I’m happy that we won,” Black said. “That was a big goal for this senior group. We’re happy with the outcome. Down on paper, we had all of the matchups and all of the ways to shuffle 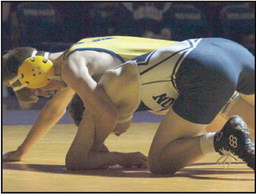 Freshman Jonas Longsdorf of the RFHS wrestling team attempts to get position on junior Austin Krenz of Hudson during the 113-pound match. Photo by Reagan Hoverman 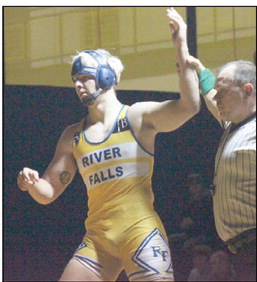 Senior Vito Massa of the RFHS wrestling team gets his arm raised in victory after pinning Hudson junior Ryan Rambo in the 220-pound match on Thursday, Jan. 6.Photo by Reagan Hoverman