Junior guard Sydnee Nelson battles her way to the basket in the final minutes against Woodbury Friday. Photo by John Molene
Sports
Park girls rock and roll to 3-0 week

After starting the season 1-5, the Park Wolfpack have turned things around.

The 14-point victory pushed Park’s season record to 6-5 and to 3-2 in the Suburban East Conference. Woodbury fell to 2-9 on the season and 0-6 in the SEC.

The win capped a dominating stretch by the Wolfpack, who won their fifth straight game by double digits. Park’s margin of victory during the streak has been 60-to-34.

“We’ve been able to get comfortable with each other,” said junior guard Emma Ambroz. “And we got more aggressive just playing our same game. We always keep our same mentality but it’s starting to pay off now in the way we’re learning more about each other and playing together.”

“We definitely stay composed,” said sophomore guard Tori Henderson. “We usually have one good half and bad half but this time both halves were really good and on defense, I think our defense was really good.”

Park had the game in hand most of the way Friday. The Wolfpack stretched a 15-12 first-half advantage to 28-16 at the half. The second half was more even, and Woodbury cut Park’s lead to 41-33 in the final minutes but could come no closer.

“We’re figuring things out a little bit,” said Park head coach Stephanie Tolkinen. “They’re playing together, trusting each other a little bit more, trusting what we’re trying to have them do. Our defense is improving. Running our offense, we’re not doing anything special we’re just trying to stick to some of the basics and look for the open shots and not to force anything.

“We just have to keep getting better at what we do,” Tolkinen added. “We’re not even close to where we need to be.”

Park scored its most lopsided win of the season Thursday with a whopping 71-30 victory at Hastings.

It was the fourth straight win for the Wolfpack, as the team evened its record at 5-5 on the season.

Earlier in the week, Tori Henderson and Justine Jameson each scored 14 points to lead Park to a decisive 54-30 win over Mounds View (4-5. 2-3) Tuesday, Jan. 4, in Suburban East Conference girls basketball.

Park took command from the start and led 27-12 at the break. 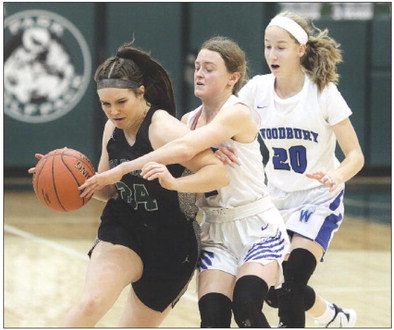 Park guard Emma Ambroz brings the ball up against pressure from a pair of Woodbury opponents in Park’s 47-33 win. Photo by John Molene