The Prescott Cardinals soft _ ball team, which prides itself as one of the best hitting teams on this side of the state, was of _ fensively stagnant in the biggest game of the year against Baldwin _ Woodville, an 0 _ 4 loss that severely hampers the Cardinals’ quest for a Mid _ dle Border Conference title.

Throughout the season, the Prescott offense has been in _ consistent, to say the least. In Prescott victories, the Cardi _ nals are averaging just over 12 runs per game. However, in losses, Prescott is averaging 2.25 runs per game. The di _ chotomy between wins and losses has been puzzling to Prescott head coach Nick Johnson.

bat, you pop out the second at _

bat, pop out the third at _ bat, we’re just not getting better.”

Woodville during that Thurs _ day, May 5 game; only one of them went for extra bases, jun _ ior Addie Raebel’s double down the left field line in the top of the fifth inning.

Baldwin _ Woodville’s ace pitcher wasn’t available for the start against Prescott. Even though the Cardinals avoided one of the best pitchers in the state, Prescott wasn’t able to score a single run.

“It’s frustrating,” Johnson said of the missed opportunity. “Especially seeing their #2 pitcher and we can’t score a run. That’s their backup. We’re not taking advantage of any sit _

uations. They gave us opportu _ nities and we weren’t able to take advantage of them.”

Baldwin _ Woodville is as good a team at the plate as Prescott will see all year. It’s no surprise why the Black _

hawks finished runner _ up in the Division 2 state champi _ onship game last season. Prescott star pitcher Taylor Graf got the start in the circle on the road against Baldwin and gave up only one earned run in her performance.

Three of the runs that the Blackhawks scored came off of an error down the third base line which opened the game up in favor of Baldwin _ Woodville. Johnson spoke about issues defensively and how Graf isn’t getting the run support she needs to win big games.

“We’re not executing defen _ sively,” Johnson said. “Taylor (Graf) is phenomenal, she gives up one earned run and she keeps us in every game. We have to help her out offen _ sively.”

While Prescott piles on the runs against lower _ level teams, in their losses, they’ve not only struggled to hang crooked numbers, they’re struggling to get on the board at all. Johnson spoke about some of the con _ cerning offensive numbers.

“I just told the girls, in our four losses in 28 innings, we’ve scored in four total in _

While Johnson was disap _ pointed, senior third baseman Liz Rohl was frustrated by the defeat. Rohl and the Cardinals will look to bounce back on Thursday, May 12, when they host Baldwin _ Woodville in the second game of the season se _ ries. She spoke about how this loss changed the rest of the season.

“We’ve got to start playing with some grit and some men _ tal toughness,” Rohl said after the loss in Baldwin. “We’re getting deep into the season and it needs to start. We’re a really tight team and we’re working hard to get better. This (loss) only makes me hungrier; I know it makes them hungrier, everyone wants to get better and we can’t wait until next Thursday because we’re com _ ing.”

Rohl stated that she and the girls in the locker room are aware of some of the lackluster performances in the biggest games of the year, most no _

tably the game against Bald _

“We play well against the lower _ level teams,” Rohl said. “For some reason, when we get up to these bigger games, we just can’t pull out a win.”

The Cardinals will have their chance to move back into a share of first place in the con _ ference standings on Thursday, May 12, when Prescott hosts Baldwin _ Woodville in a game that will likely decide the con _ ference champion. That game is slated to begin at 5 p.m. 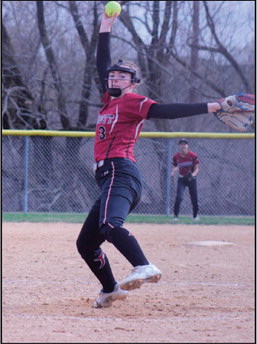 Prescott junior pitcher Taylor Graf allowed only one earned run during her outing against Baldwin_ Woodville on Thurs _day, May 5. Coach Johnson stated after the game that Graf deserves better run support from the lineup in these critical games. ________________________