Ellsworth sophomore Aubrey Wittenberg blasts a ball to center field for a double during the Panthers’ road playoff win against Saint Croix Central. Wittenberg was one of Ellsworth’s best hitters this season and played solid defense throughout the year in center field. She earned SecondTeam AllConference honors for her efforts this year. Photo by Reagan Hoverman
News
Four Ellsworth Panther softball players receive All-Conference honors

Shortly after the 2022 season came to an end, the Ellsworth Panthers softball team had four varsity players receive All

athletes to receive recognition are seniors Sidney Bartels and Brianna Maurer and sophomore Aubrey Wittenberg, all of whom received Second Team All

ence recognition. Those three are joined by junior Kallie Beis

sel, who received All

tainly had a direct impact on the success that the Panthers had this season, which peaked with a 10

gional Championship victory on the road against the top

In that game, the leadership and talent of the four All

ference honorees were on full display. The four All

ence selections accounted for seven of the nine total RBIs that Ellsworth had against Somerset. Ellsworth head coach Kenzie Diercks spoke about that talent at the top of the order.

“It’s consistency, (Aubrey Wittenberg and Brianna Mau rer), they’re both so consistent for us,” Diercks said of her one and two hitters in the lineup. “They are the easiest going kids. It gets the team that much more riled up for them. Aubrey isn’t your typical cocky #1, she’s quiet but shows it with her tal –

Wittenberg, Maurer and Bartels defensively anchored the team this season and were consistent from the first pitch of the season. Ellsworth began the 2022 campaign with a non conference game on the road against the Hudson Raiders.

Although the Panthers lost that game, the hitting at the top of the lineup and the strength defensively were evident. Throughout the game, Wittenberg made several great plays in center field to take potential scoring opportunities away from the Raiders. Diercks spoke about the Panthers’ defense.

“Aubrey (Wittenberg) is a student in center field,” Diercks said. “Aubrey, Brianna (Maurer) and Sidney (Bartels) are our returners. Those three, we know what we have there and we know how good we are. We’ve got good people all over the field.”

Throughout the year, Ellsworth experienced ups and downs like a lot of other teams. One of the biggest highlights was the Tuesday, April 19, home game against Prescott. In that contest, senior Shayla Gilbertson hit a grand slam over the center field fence to seal the victory.

The Panthers also faced their share of adversity throughout the year. At one point in the middle of the season, Ellsworth dropped five out of six games and fell out of the race for a conference championship. However, it was the leadership of the four All Conference girls and the seniors that helped the team bounce back.

Coach Diercks has been at the helm for approximately half a decade. Throughout the 2022 season, she made it clear that this senior class of girls is one of the best – if not the best – groups that she has ever coached. She spoke about what they’ve done for the program.

“This group of seniors has learned to work through adver sity from early on,” Diercks said. “I’ve had the privilege to watch them mature, grow, and give this program more than I could have ever asked for for the past four years.”

The seniors overcame adversity not just in the 2022 season, but also in their sophomore year of 2020 when the COVID 19 pandemic derailed the sports world and canceled high schools spring sports throughout the United States.

According to Diercks, that sophomore year was shaping up to be another special season for the Panthers, as the program was coming off of one of the best years in program history. In 2019, Ellsworth went 24 3 and made it to the state tournament. Diercks spoke about losing that 2020 season.

“While their sophomore year was a heartbreaking loss for all, they showed what perseverance and faith do and came out stronger and more eager to play the game we all love,” Diercks said. “Their junior year was a refresh back to the game and now their senior year they left us in the right direction, re

gional champs with more in the tank to give.”

While the seniors were certainly impacted by the COVID 19 pandemic, the junior class was also negatively impacted. All Conference Honorable Mention recipient, the aforemen tioned Beissel had her freshman season canceled.

Beissel and the rest of the juniors bounced back, overcame adversity and performed at a high level. Beissel quickly settled into the team’s role as the primary closer in big games. Throughout the year, Diercks would turn to Beissel in the biggest moments when relief pitching was needed.

“Kallie has been our go to closer and we had liked to keep her for the end of games or when we are struggling as she holds herself the most confident on the mound and handles pressure well,” Diercks said.

Beissel was not only the closer for the team, but she also played an important role in the lineup, as she was one of Ellsworth’s most consistent hitters. Diercks spoke about Beis

sel’s value to the lineup.

“Because we need her in our line up offensively but defen

sively only use her for pitching, we start her as our DP,” Dier cks said. “If we don’t, we either lose her bat or play her defensively if we need to make a pitching change.”

Beissel, Wittenberg, Bartels and Maurer played an integral role in Ellsworth’s success this season as they competed in one of the toughest conferences in the state and won a D2 Re

letes were rewarded with All Conference honors for their efforts in this successful season. 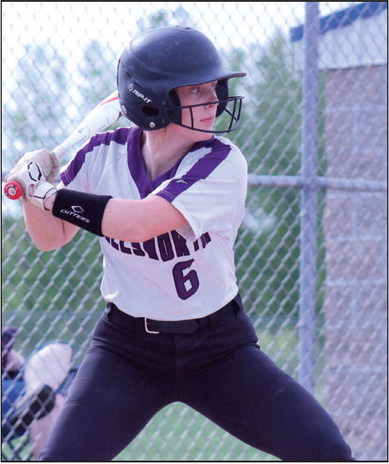 Ellsworth senior Sidney Bartels stands in the box during a game earlier this season. Bartels earned AllConference Honorable Mention for her efforts this year as one of the team’s best hitters and most solid defensive players. Photo by Reagan Hoverman