Player of the Year, a fitting end to one of the most decorated Cardinal athletic careers in recent memory.

sport athlete in football as a quarterback, basketball as a forward and baseball as a middle infielder and pitcher, has added another trophy to his athletic resume, in addition to five other Spring Valley baseball players that received All

Conference honors, including seniors Tyler Bowman and Charlie Maier on the First

For Spring Valley head coach Brandon Walczak, Duck low’s selection to the highest award of the season isn’t just about his pitching ability, it’s about what he brings to the ball park daily as a leader, versatile position player and consistent offensive production.

“I think it’s a great recognition for him and how other coaches across the conference viewed him,” Walczak said. “He’s Co Player with Jacob Granley, Jacob’s numbers were more based on his pitching and Connor’s were pitching and offensively. (Ducklow) shouldered a big load for us all around.”

Ducklow finished the year with an ERA of approximately 2.5. However, coach Walczak stated that figure could have been significantly lower because of the teams that Ducklow pitched against. He consistently faced the toughest teams dur ing his time on the mound.

While Ducklow was dealing on the mound, he was also one of the only players in the conference who mashed at the plate. Throughout the year, he was intentionally walked multiple times because of his ability to go deep and spray the ball to all fields.

“Offensively, he was intentionally walked a handful of times throughout the season,” Walczak said. “I don’t think he expected to win Player of the Year (going into the season), but the potential was there and we knew it was possible.”

Ducklow shares the Player of the Year award with Jacob Granley of the Boyceville Bulldogs. Throughout the year, the two players left their footprint on their respective programs. For Ducklow, it’s his play on the field, but it’s also about his leadership.

“He’s a phenomenal leader,” Walczak said. “He leads by example, is a vocal leader and is the first person to hold him self accountable. He’s a great leader in the aspect of holding other people accountable. Not in the way of belittling them, but in making sure they know the expectations of our team.”

Walczak spoke of Ducklow in a way that few coaches ever speak of high school players. He stated that Ducklow is es sentially an extra coach on the field.

“He’s basically like having an extra coach out there, along with some of our other seniors,” Walczak said. “In a sport like baseball where you only have a few coaches and more than 20 players, you can’t always have eyes on everybody at one time. We have to rely on players like Connor to be a coach and help out where he can. Those kids look up to him.”

While Ducklow has certainly been the standout for Spring Valley, other seniors, including the aforementioned Bowman, Maier, Bednarek and Stein have also provided leadership to underclassmen and have been in leadership roles since they were sophomores and juniors in the program, according to Walczak.

“All three of them had to start as freshman in some way and have been solid pieces of our program the last four years,” Walczak said. “They’ve been great leaders and this season have been some of our most offensively productive players and basically cemented our pitching staff in a 1 2 3 rotation. Those three are guys you want to have in your program.”

While Spring Valley didn’t have any players on the Sec

ond Team All Conference list, the Cardinals did have three players receive honorable mention including the aforemen tioned Bednarek, Stein and Bartko.

Bednarek has been a staple in the lineup for years. He played varsity dating back to his freshman year in the spring of 2019 and has been an anchor for the Cardinals’ infield throughout the years, in addition to batting leadoff since his junior season of 2021.

“Brady has been rock solid for us and has batted leadoff since he was a junior. He’s a guy you can expect consistency out of,” Walczak said. “Jackson (Stein) only had a few innings of varsity experience coming into this year. We knew he would be a decent catcher, but he stepped up tremendously and took coaching really well.”

In addition to Bednarek and Stein, freshman Caleb Bartko made the All Conference Honorable Mention list. He was one of three freshmen in the entire conference to make one of the three lists, joining Hunter Sandberg of Mondovi and Kamron Diermeier of Elk Mound.

“Caleb (Bartko) was a DH for us, but he was probably top three on our team in batting average,” Walczak said. “He had multiple base hits and that’s not something you expect from a freshman. Getting that honorable mention and coaches notic ing him seeing that he’s doing something that not a lot of freshmen do was a good shoutout for him.”

Spring Valley finished the year with a 12 6 overall record and a 10 4 showing in Dunn St. Croix Conference action. Throughout the season, the Cardinals pushed the top teams in the conference to the brink, including two heartbreaking losses against the conference champion Elk Mound Mounders.

The Cardinals’ season ended on Tuesday, May 31, in the Division 3 Regional Semifinal against Boyceville. Coach Wal czak reflected on the season in its entirety.

“It was a very successful season, there were ups and downs, there were some things as a team we wish we could change, but in sports just like in life, you can’t,” Walczak said. “The seniors are moving onto bigger and better things. Hopefully, they taught a lot to those underclassmen. It was another en joyable season as a coach and this was a great group of kids.” 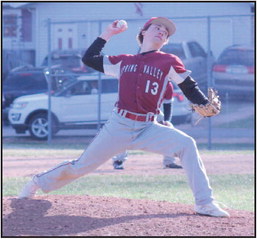 Spring Valley senior Charlie Maier delivers a strike during a relief appearance earlier this season at home against Mon dovi. Maier earned a spot on the 2022 FirstTeam AllConference list for his efforts this season. Photo by Reagan Hoverman 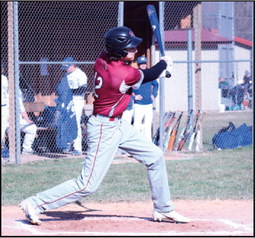 Spring Valley senior Tyler Bowman cracks a base during a game earlier this season. Bowman was versatile throughout the year with his play in the field, on the pitching mound and at the plate. He earned a spot on the 2022 FirstTeam AllConference list.Photo by Reagan Hoverman