Based on scores, returning players and how head coach Carson Huppert feels about his program, there is a lot to be excited about for the Ellsworth boys’ golf team after the Panthers exceeded ex

Ellsworth finished the season third in the Middle Border Con ference standings, trailing only Amery in second and Saint Croix Central in first place. Coach Huppert spoke about the season, the conference finish and what he made of the year.

“I think we had a pretty successful season,” Huppert said. “We finished third in the Middle Border and I think we played well. We bring a lot of talent back, so the future looks good.”

Huppert stated that throughout the year, Ellsworth competed with and occasionally played better than both teams that finished ahead of the Panthers in the conference standings. Both Amery and Saint Croix Central returned veteran rosters for the 2022 sea son, whereas Ellsworth had some youth with three of its best players being sophomores and juniors in the aforementioned Oricchio, junior Vinny Young and sophomore Trey Wittenberg.

The 2022 season was an improvement on the 2021 season. Huppert stated that it’s a testament to the work that the kids put in throughout the summer for the improved in season results.

“I knew that (it was going to be better) because I see them a lot throughout the summer and the effort they put in, they live on that golf course,” Huppert said. “I knew coming in they were going to be better. They exceeded my expectations.”

Throughout the year, Wittenberg was Ellsworth’s #1 golfer and consistently posted some of the best scores on the team. However, it was Oricchio who elevated his play and exceeded expectations in the sectional tournament at the Bass Lake Golf Course in Antigo. Oricchio’s 80 qualified for the state tournament the following week.

“(Oricchio) is a gamer. He likes the pressure and will embrace it,” Huppert said. “He handled the pressure really well. Even after a bad hole, he was able to bounce back and that’s something we preach all the time. He was cool and calm under the pressure to make it to state.”

Oricchio’s stellar play at the sectional tournament carried over to state, where he finished T 12 and was one of the few golfers in the tournament who shot a better score on the second day than on the first day.

“I think he exceeded expectations by placing T 12,” Huppert said. “That was pretty cool. I don’t know that he expected it, but now he has a lot more confidence going into next year.”

Huppert spoke about the work that Oricchio puts in throughout the year to become a better player and briefly addressed what he is capable of next spring for his senior season.

“I know he’s going to work this summer and into the winter, he’s even working out for his golf game,” Huppert said. “His con

fidence is growing by the week. I think he’s got a great chance to place in the top six in the state next year.”

Going into the 2022 season, Huppert had high expectations for his varsity squad which showed promise and young, raw tal ent the year before in the 2021 season. That talent was a bit more refined in the 2022 season and is now putting the Panthers’ golf program in a position to have its best season in nearly a decade, given they return their three best players.

“We have three guys coming back who are our three lowest average scorers,” Huppert said. “Trey Wittenberg and Vinny Young are the other two coming back. Trey was actually our #1 golfer, he just didn’t have a very good sectional.”

Returning the top three players is a strong position to be in for any high school golf program. Not to mention that Ellsworth’s JV was the best in the Middle Border Conference this year and regularly won meets.

Huppert spoke about a strong returning cast, as well as some new additions from the JV that could help bolster an already strong varsity team as a couple of the Panthers are lost to gradu ation.

“Two guys on JV coming up are really good players too,” Huppert said. “Our JV never lost a conference meet and won ba sically every JV meet they were in. I have confidence that we will be pretty good again next year.”

The graduating seniors who played varsity this year include Hunter Westerberg, Nick White and Jacob Strusz. Despite losing valuable senior leadership and consistent varsity play, Huppert is confident in the future of the Ellsworth golf team for the 2023 season next spring with the valuable returning players and prom 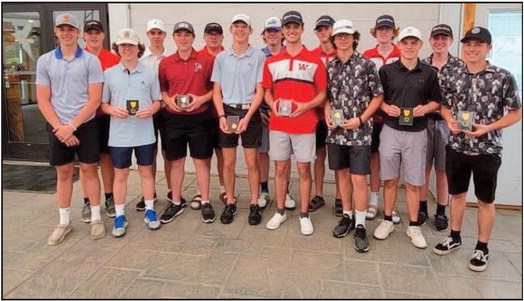