ELMWOOD – Even though he is no longer Elmwood’s village president, that doesn’t mean Bill Stewart is going to hop on his Harley and ride into the sunset. He just has to focus on his health for a while, but will remain in the town he’s called home for 35 years.

Stewart resigned as the village president after a 21-year tenure at the July Elmwood Village Board meeting. Health issues and needing to reduce stress prompted the move. He also alluded to ten- sions between village stau and trustees as producing stress.

“I ran into a few health issues this spring and I just needed to scale back from some of my responsibilities,” Stewart said. “I had a mini stroke and they don’t know what’s going on with me. I just wasn’t feeling very good and had numbness around my mouth.”

The numbness he referred to occurred on June 7. He called an ambulance and EMS advised he may have had a mini stroke, which prompted a visit to the hospital.

“So that was kind of the

Elmwood Village President Bill Stewart has stepped down from his role after 21 years of public service, citing health issues as the main reason. He and wife Donette plan to remain active in the community they love. Photo courtesy of Bill Stewart Stewart

spur, hey, I’ve got to change some things in my life,” Stewart said. “It’s a good/bad thing. I’ve had a whole workup. My blood pressure is good, my cholesterol is good. My arteries aren’t clogged, heart is in good shape.”

Stewart, who worked as Pierce County Sheriu's Ovce deputy for many years, tried to get a friend of his to run for village president 21 years ago. But he decided not to, so Stewart threw his hat in the ring.

“You got to be involved if you’re going to bitch,” Stewart laughed. “I ran against Delores Radtke, she had a pretty long-running career. It was one of the biggest elections in our town.”

Many elections after that one, Stewart ran for the position unopposed, which isn’t surprising to him.

“It’s really a thankless job. Not a lot of people want to do that job,” he admitted.

Around 2003 or 2004, Kevin Kitchner challenged Stewart for the job and won. Stewart recalled that it was an extremely close vote. But after two years, Kitchner said he’d had enough.

“From then on I’ve run unopposed all these years,” Stewart said. “I enjoyed it because I have deep law enforcement background and that helped me in doing right for the village.”

For anyone considering local public ovce, he cautions them to not get into it for the money. Between countless meetings, phone calls, resident interaction, and community representation, the pay comes out to probably a few cents an hour.

“If you’re going to get in it for the money, you’re getting into it for the wrong reasons,” Stewart said. “My W2 was less than $900 last year.”

Stewart, who values public service, worries that less peo- ple will get involved in local ovces because the pay isn't great. The real payment comes from personal satisfaction, he said. He's also worried the village won't be staued properly with many people leaving long-time positions. Clerk Amy Wayne left in May after 12 years for a new position, but the village recently filled the role with September Podoll. Public Works Director Jamie Reitz recently retired after 30 years and

Police Chief Chris Thibado has gone to the Pierce County Sheriu's Ovce, Stewart said. “We’re a small town with a small budget,” Stewart said. “You have to come to work and like your job, more so than in other towns that can auord to pay more. Our budget is only so big and only so much money. If you have a great working environment, you would maybe put up with more than if it were a hostile working environment.

“I’m afraid that at this point in time that the town will crumble.”

Elmwood is in a unique location ou the beaten path, 11 miles from the interstate and sandwiched in the deep valleys between Eau Claire and western Pierce County. Stewart said the population of the village hasn’t changed much and he doesn’t believe it will anytime soon. While it’s a neat place to live, it can be a tough place to live, he said.

“You have to drive to Menomonie, Eau Claire, Red Wing, River Falls for a grocery store if you want more than a gallon of milk,” he said.

As for who is filling his vacant role, Stewart appointed Trustee Paul Unser as president pro-tem last year with the expectation that he was going to leave town for the winter months. Unser will remain in that role and the board will have five members instead of six. “He has the power and authority to select a community member to sit on that (Unser’s) seat until April. But I did that once, and I wouldn’t do it again. It’s better if they’re elected by the community,” Stewart said.

As he looks back on his service, he feels he has a few feathers in his cap, accomplishments that make him proud, but one stands out to him. He helped get an elevator in the historic Elmwood Auditorium, making it accessible to handicapped people. The upper story is now used for multiple events, such as craft fairs, 4-H events, dinner theaters and more.

"Our building is old and there was a drive to get an ele vator to make the building handicapped accessible,” Stewart said. "People couldn't use it (the upper floor) much. Unless three men and a boy lugged you up.”

As for what he found challenging, Stewart said while he’d have a hard time picking one thing, a more recent phenomenon has been tough: people’s lack of patience and understanding.

“Recently, we’ve had challenging things in the village, just the way people want to be treated and are treated,” he said. “As citizens, they think things can happen overnight. It just takes time to get things figured out. It can't be done at the snap of a finger." It’s hard for Stewart to give up his role because he enjoys politics, the village, the community. He’s also active in the American Legion, the Community Club and is a busy grandpa. He delivers meals for Meals on Wheels through the ADRC and takes veterans to appointments at the VA. He even works part-time for three law ovces, serving summonses and subpoenas.

“I have to water it down a little bit,” Stewart said. “It’s hard to decide which ones to scale back. But I’m very grateful for the years I’ve had. I’ve lived here for 35 years. This is my town. I want to keep invested and do whatever I can to help this town be a cute little town.”

As for riding ou into the sunset, he and his wife rode ou in their motorhome for two weeks to Sturgis, his 33rd year in a row. But don’t worry, because he’ll be back. 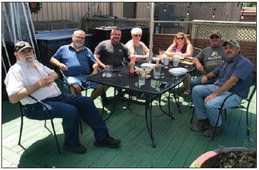