The Prescott High School football team is going to be young this year, as the Cardi – nals graduate eight starters on both sides of the ball from last season. Because of that, the coaching stau has worked hard to get the team ready through optional ouseason pro – gramming.

All ouseason programming for every school in the state has to be optional because of WIAA regulations. However, those who attend programs such as weightlifting ses – sions and joint practices have jumpstarted growth for the 2022 season.

Summer team camp began with joint prac – tices in Holmen for two contact days with the school and coaching stau where current Prescott football head coach Jordan Hansen used to work for seven years. The team spent two days there and did joint practices and team bonding exercises. After that, Holmen came to Prescott for two days and continued joint practice sessions. Coach Hansen spoke about the value of those joint practices.

"I've got a pretty good relationship with those guys in Holmen and an opportunity came up," Hansen said. "Joint practices are great because when we have our (starters) out there, we get a really good look when we go against a school like Holmen that has 1,200 kids. When we put our ouense or defense out there, we know we're getting a good look." Although pads weren't on until the last two days, Prescott and Holmen got a chance to go through basic ouensive and defensive schemes while getting a fresh look against a diuerent team. In addition to the camp with Holmen, weightlifting sessions throughout the summer have been critical to the growth of young players.

"Our new weight room stuu has been real ly good for us and a lot of our younger guys have been putting the time in," Hansen said. "We're replacing eight starters on both sides of the ball, so there is a lot of work that needs to be done. Camp, the weight room and ev – erything we can get our hands on to help us get better helps. I thought we did a good job in the weight room and at camp." Hansen stated that camp and joint practic –

es with Holmen have given him an opportu – nity to see younger players get practice reps before the season. Seeing those players be – fore the first ocial day of practice, which is slated for Aug. 2, can't be understated.

"It's good to get an eye on who can play and who is ready now and who needs more practice reps or to be coached up," Hansen said. "Especially with a young team, those days really help us see who can play and who needs to be coached diuerently or needs a po – sition change." High school is a developmental time and young student-athletes can change the en – tire complex of their body in one summer. Whether that be through growth spurts or just old-fashioned time in the gym, Coach Han – sen has already seen significant changes in some of his returning players.

thing that Hansen and the rest of the coach – ing stau have emphasized throughout the summer, especially with the remodel of the weight room that made Prescott's facility one of the best in the Middle Border Conference. He spoke about how that has already impact – ed his football program.

"It has changed our program in a really good way," Hansen said. "We're able to get more kids in there at one time, we're able to facilitate better and we don't have to move around the whole time. We can structure things better. It's getting younger kids excit –

ed to be in there as well and they pride them – selves on the stuu that we've gotten. It's been a big help." Although optional, Prescott's summer football camp provided young players an opportunity to get working earlier than the traditional schedule allows. Last year, Coach Hansen installed a completely new ouensive and defensive system that wasn't fully final – ized until approximately midway through the season.

Now, his returning players have one more year in the system and an ouseason sum – mer camp of installation before the season ocially begins. For Hansen, that's a huge jumpstart to the season compared to last year.

"I think we built a really good team bond over camp," Hansen said. "Running our of – fense and defense for the first time last year, we're further ahead now because we've run it for a year. We already have a base idea of what we're doing and the kids grasped that at camp. That was stuu we were putting in midseason last year that we're doing in camp this year. It has helped a lot." The first ocial day of football practice is Tuesday, Aug. 2, and the first scrimmage is on Friday, Aug. 12, on the road against Os – ceola. That scrimmage is slated to begin at 11 a.m.

Members of the Prescott High School football team stand together after helping unload a semi-truck at the local food shelf. The players went to provide assistance after their morning weightlifting session at the high school as part of their summer programming. Photo courtesy of Prescott football

The Prescott and Holmen High School football teams shake hands after one of the offseason joint practices at Holmen. Prescott spent two days in Holmen and then Holmen traveled to Prescott for another two days of joint practices and preparation for the season. Photo courtesy of Prescott football 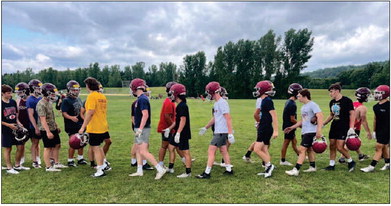