It doesn't get more clutch than a walk-ou home run while trailing to punch a one-way ticket to the postseason.

That was the scene in the bottom of the ninth inning on Saturday, July 30, when the Spring Valley Hawks hosted the River Falls Fighting Fish in a do-or-die situation to reach the postseason.

The stakes were high for both teams entering that penultimate regular season contest. For Spring Valley, it was a win and get into the playous situation and for River Falls it was a chance to clinch an outright St. Croix Valley Baseball League championship.

Both teams had traded leads throughout the game and going into the bottom of the ninth inning, River Falls held an 8-6 lead over Spring Valley. The Hawks began that final frame with a leadou single to left field.

The ensuing batter, Scott Sayles, laced a ball to the shortstop which forced a bobble ou the hop and prevented a throw to first. Then with two on and no outs, Dennis Schutz nuked a ball over the left field fence for a walk-ou three-run home run to secure a 9-8 victory and a playou berth.

As he began rounding the bases, River Falls players hung their heads as they walked back to the dugout while Spring Valley poured out of the home team dugout and began celebrating at home plate. The stakes couldn't have been higher and Spring Valley delivered in dramatic fashion.

Spring Valley Hawks catcher Blaine Guthrie rounds second base and approaches third after a teammate hit a ball to the outfield gap which ended up scoring Guthrie, who was one of nine Hawks who scored a run Saturday night against River Falls. Photo by Reagan Hoverman SV Hawks

"It's a huge relief when you can clinch a playou spot, especially under those cir – cumstances," Spring Valley manager Erik Thompson said after the game. "River Falls is the class of our league and they’re a team that a lot of teams try to emulate. If you're a baseball fan, that game just had everything. Fortunately for us, we had the last at-bat, be –

cause that's what it really came down to." While both teams had quality starting pitching on the mound, the lineups were di – aled throughout the game which featured a combined four home runs, including the aforementioned walk-ou. River Falls looked like it would cruise to a victory after scoring two runs in the top of the fifth inning to take a 5-0 lead over Spring Valley.

However, in the bottom of the sixth, the aforementioned Schutz got the Hawks' scor –

ing going with a solo home run to straight – away center field. The pop in his bat must have sparked something, as Spring Valley scored five additional runs in that inning to take a 6-5 lead over River Falls.

"We had them buried at 5-0 and we couldn’t string another inning together to put them away," River Falls manager Josh Ei – dem said. "They kept clawing and they could have folded when it was 7-6 (in favor of Riv – er Falls) and they didn't, so more power to them." Eidem alluded to regaining the lead in the seventh inning when River Falls scored two runs to get back on top 7-6. Spring Val – ley ended up getting the last laugh with that walk-ou home run trot approximately 30 minutes later.

For the Hawks, it's been a long, injury-rid – dled season that has been anything but what Spring Valley was expecting this year. First baseman Steve Hensley has been out with a knee injury for nearly two months. Starting catcher Blaine Guthrie has also been dinged up throughout the season.

"We've battled a number of diuerent (in – juries)," Thompson said. "Everyone deals with some of those injuries, but we had some great young players come in and step up. Trey Witt (who pitched in relief against River Falls) he's going to be a senior in high school. To have him come in and get some outs against that lineup is amazing. I wouldn't be surprised to see River Falls win it (the state championship) when this season ends." While a couple of Spring Valley's players remain on the injured list, several players have returned from missed time and are mak- ing regular appearances in the lineup. Ac – cording to Thompson, the squad that took the field against River Falls on Saturday night was the most complete lineup Spring Valley has played in more than a month.

The win improved Spring Valley's overall record to 9-9 for the season. Getting back to .500 is a significant milestone because that's typically the threshold to clinch a postseason berth as determined by the Wisconsin Base- ball Association (WBA).

While Spring Valley celebrated the victo – ry, River Falls had to regroup for a Sunday afternoon game against Prescott. The Fight – ing Fish bounced back with a 5-3 win over Prescott to secure the 2022 St. Croix Valley Baseball League championship with a 15-3 record in league play.

Both River Falls and Spring Valley will compete in the annual St. Croix Valley Base – ball League tournament on Saturday, Aug. 6, and Sunday, Aug. 7, which will be played in Bay City and Prescott. Those games are slat – 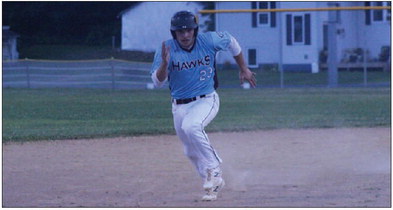