Less than one week earlier, the Blackhawks swept Prescott in a best-ofthree series at the annual Baldwin-Woodville quad. Prescott head coach Tracey Budworth watched the film, made adjustments and figured out how to attack a talented Baldwin-Woodville squad that entered the Thurs- day night contest with a 14-2 record.

Prescott recorded three consecutive set victories which featured scores of 2514, 25-22 and 25-23 to record the 3-0 series win. Those ad – justments based on the film of the Baldwin-Woodville quad made all the diuerence, according to coach Budworth.

"I adjusted my lineup as a result of the quad and we adjusted some of how we're setting up and covering. I think we took a lot away from that," Budworth said. “I think that Baldwin-Wood- ville match at the quad was tough for us and we were upset with that loss. We knew we could play better and it lit a fire under us." Whether it was that fire lit from the loss at the quad or the raucous home student section shaking the gym with its cheering, something propelled Prescott to an early lead in the debut set on Thursday night.

The ardinals jumped out to an 8-2 lead and made it look as if the first set was going to be a blowout. However, the Blackhawks re- sponded with a small scor ing barrage of their own and  brought  it  to  within  two  points,  9-7.  Prescott  answered  with  a  10-4  scoring  run  that culminated in an 18-11 lead and a time- out by Baldwin-Woodville head coach Shan non Kamm.

The Blackhawks’ timeout did little to slow Prescott’s momentum as the Cardinals cruised to a 25-14 victory in the opening set  to take a 1-0 lead in the best-of-five series.  The  second  set  proved  to  be  significantly  more competitive than the first.

There were eight diuerent lead changes be fore either team scored 15 points. If Prescott went  on  a  scoring  run,  Baldwin-Wood – ville  immediately  answered  and  vice  versa.  Throughout the season,  Prescott has  been  a  team that capitalizes in the middling portions of sets and puts games away before either team gets into the 20s.

Prescott continued that during the second set against the Blackhawks when the Cardi- nals, who at one point trailed 10-9, went on a  run in the middle of the set and took an 18-13  lead. The Blackhawks battled back and tied the game 22-22. Prescott strung together the next  three  points  to  secure  a  25-22  victory  and take a commanding 2-0 lead in the series.

"We have talked a lot about how she's the  only setter on the court and that she needs to control the court," Tracey Budworth said.  "We've talked about how she needs to take  control because she’s capable. In the last few games, she's stepped up to that and is call – ing plays. She seems to be very confident in  herself now and it shows. She knows that she  can control the floor." Syverson  continued  her  ouensive  excel lence into the third set as Prescott and Bald- win-Woodville  got  into  another  deadlocked  contest. Throughout the third set, the Cardi nals and Blackhawks were knotted up three times including scores of 5-5, 13-13 and 2323. While the third set was tied several times,  Baldwin-Woodville controlled a majority of  the set.

lied to score two consecutive points and se – cure a 25-23 victory to sweep the series 3-0.

"I  knew  we  could  beat  them,"  Tracey  Budworth said just moments after her squad secured  the  sweep.  "We  didn't  play  well  against them at their quad last week and we just struggled. Even though we struggled, we  played close sets." Those close sets, as well as the aforemen – tioned  adjustments  Budworth  made,  proved  to  give  Prescott  confidence  on  Thursday  night  in  the  MBC  opener.  She  spoke  about  their goal going into the match against the Blackhawks.

"Before each game, we talk about what we  do and don't need to do during each game,"  Budworth  said.  "The  first  'do'  was  to  win  three tonight. They hit their 'do' the first one  of the year. I knew we had it in us and now we've found it." Throughout the first month of the season,  Prescott had been plagued by struggles with serving and receiving the opposition's serve.  Those  woes  have  essentially  vanished,  as  the  Cardinals  were  statistically  excellent  in  both departments on Thursday against Bald- win-Woodville.

"I'm pretty sure I'm going to have a cou – ple of 100% serving rates today," Budworth  said. "It's fantastic and I'm very happy about  it." Prep  sports  prognosticators  favored  Prescott  and  Baldwin-Woodville  to  be  the  two top teams in the Middle Border Confer- ence  this  season.  Baldwin-Woodville  began  the season with a 14-2 record before falling to  Prescott in the conference opener and is 8-1 in the last nine games. Budworth spoke about a potential rivalry with the Blackhawks.

"I  think  Osceola  is  going  to  look  pretty  good, but this (Baldwin-Woodville) team was  going to be our biggest competition in the conference,"  Budworth  said.  "To  start  with  them and sweep, I think it's a good omen." With the victory, Prescott improves to 14-9  for the season and 1-0 in Middle Border Con – ference action. Up next for the Cardinals is  another conference game on Thursday, Sept.  22, at home against Saint Croix Central. That  match will begin at 7 p.m. 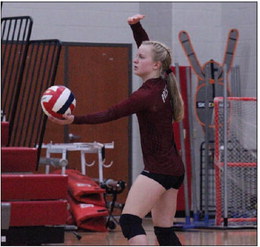 Prescott sophomore defensive specialist Kelsey Sterud prepares for a serve during the first set against Baldwin-Woodville on Thursday, Sept. 15. Photo by Reagan Hoverman 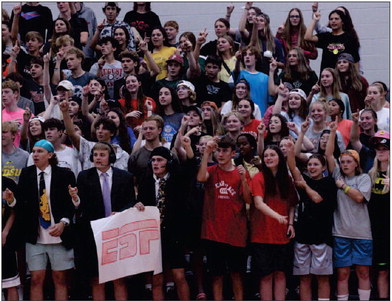 The Prescott student section holds up one finger to signify the Cardinals were one point away from sweeping Baldwin-Woodville. The student section was as loud as it’s ever been for a regular season game at the volleyball Middle Border Conference opener on Thursday night. Photo by Reagan Hoverman