RIVER FALLS – Theater-goers are in for a treat when River Falls High School’s production of “Fiddler on the Roof” opens this weekend. Director Sarah Plum encourages you to order your tickets ahead of time, as they are not guaranteed at the door.

“Fiddler on the Roof” is a musical based on a collection of short stories written by Sholem Aleichem called “Tevye the Dairyman” or “Teyve’s Daughters.” The story centers on Teyve, a poor milkman in a Russian Jewish community determined to find good husbands for his five daughters who consults a traditional matchmaker. Teyve struggles to maintain his religious and cultural traditions as outside influences come into his family life.

Director Sarah Plum said the district chose “Fiddler” in order to give students a well-rounded experience throughout their theater careers at RFHS. “Students who are seniors have had the opportunity to perform in ‘Les Mis,’ ‘Urinetown,’ and ‘Matilda,’” Plum said. “We take a look at those titles and find what is missing. We felt a classic, musical theater piece, with a deeper story was missing, so we chose ‘Fiddler.’” She also felt the storyline is relatable considering what is happening in present day Ukraine. This is Plum’s first time directing a high school production, though she has directed middle school shows in the district.

Production planning began in April when the musical’s rights were secured. Plum spent the summer planning the blocking and singing assignments, as she is both the drama and musical director. Student participation began in August with a kick-off 20-hour bootcamp in which they worked on choreography and character development.

“Since the first day of school, we spend 14 hours a week rehearsing,” Plum said. “Dress rehearsal week is 18 hours alone. It’s a big time commitment, but both the students and I would say it’s totally worth it.”

This is the first time Plum has directed a show of this scale. She said the most challenging part of producing the show has been “getting out of our own heads.”

“This is a show where you can do it like everyone else, or you can think outside the box,” Plum said. “Both the students and I have spent time learning how to push ourselves outside of our comfort zone, which in turn has been the most rewarding. The kids think of amazing ideas and we try them, and their contribution makes the show better.”

While “Fiddler” has a few staple parts that most people know about, audience members should be prepared for a few surprises.

“Our directing team and students encourage the audience to really live in the moment so that they can feel the impact the oppression of the Jewish characters in Fiddler and connect it to present day themes,” Plum said.

As with preparing for any big show, usually something funny or bizarre happens and RFHS is no exception. Plum turned one such mishap into an tasty opportunity.

“The kids would probably say the funniest thing that has happened so far was when I ordered a bunch of props incorrectly and a box of 24 real bagels showed up to my office,” she said. “Now we use them as props and snacks.” 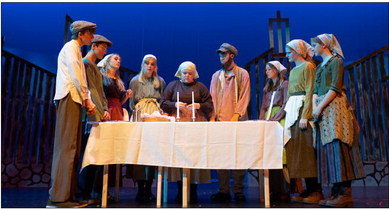 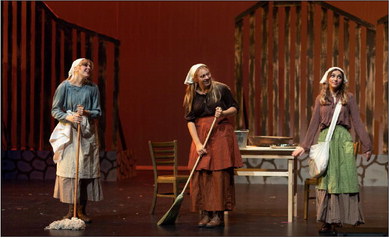