In 2018, Boyer took a student to the Amazon to study insects through Jason Learning, a nonprofit organization dedicated to providing curriculum and learning experiences in science, technology, engineering and math for K-12 students. After presenting at a science teachers’ conference in Washington DC, a representative from Jason Learning had offered her that opportunity. In 2019, she led another student on a research trip to the Bahamas to study sea turtles with marine biologists.

With two trips under her belt, Boyer felt she could lead a trip on her own. She presented the Belize trip idea to the Elmwood School Board, who was supportive. Once given the greenlight, Boyer planned the trip to Belize with Save the Rainforests.

“My biggest goal was to take the kids out of their comfort zone, see a world they’ve never seen before,” Boyer said. “It was just great to get the kids to go to another country and have these experiences. Camping, snorkeling, the ultimate adventure. I think it’s something they’re really going to remember their whole lives.”

The adventurers raised money for their trip, which cost $2,800 per person, for a couple of years. Two students had never been on a plane before. When the time came, they boarded a plane for Dallas, and from there flew to Belize where they met their tour guides, Marcos and Mauricio. They rode a bus for three hours deep into the rainforest of Belize’s western side, close to the Guatemalan border.

When they arrived at La Milpa Research Station, they were definitely out of their comfort zones. The group stayed in thatched huts with no electricity where cockroaches scuttled across the floors, scorpions dangled from the ceiling thatch and lizards meandered through at night. They slept in mosquito nets.

“Naked and Afraid,” a survivalist reality show on the Discovery Channel, filmed a season not far from La Milpa. The University of Texas also conducts research there, Boyer said.

The next day, students began their research projects which ranged from studying hummingbird and fire ant behavior to the efficacy of the Twelve ‘O Clock plant in treating sleeping disorders.

The students also visited Mayan ruins such as Lamanai, swam off a dam on the Rio Bravo, donated school supplies to a local school, took dance lessons, sampled authentic food and took night hikes. They drank out of vines in the rainforest, learned how to eat a coconut and witnessed scorpions glowing under black lights. Howler monkeys even made their appearance, a treat for the group.

And while Hartung also loved the authentic food, which included a lot of chicken and root vegetables, Allen learned to appreciate what he has back home.

“I learned not to take stuff for granted that we have here, like air conditioning, toilets, good schooling,” he said.

Lily Webb laughed as she told how she and her sister, Hailey Webb, got trapped in an outhouse in the wee hours on a very hot and humid day. Loga recounted how he and Rupakus learned that Neubauer was a scorpion slayer.

“Me, Ryan and Jackson shared a thatch hut and we just came back from our night hike,” Loga said. “We were getting ready for bed and we were about to lay down and all of a sudden we hear Jackson slashing something up in his loft. He said, ‘I killed a scorpion that was hanging above my bed.’” “You could hear the screaming from many huts away,” Boyer chimed in.

Schwebach worked on becoming more open-minded by facing her fear of spiders.

“I hate spiders and when they asked ‘Does anyone want to hold this tarantula,’ I said ‘Sure, why not,’” she said.

The fuzzy spider crawled all over her as she stood frozen in place, but she faced her fear.

The second half of the trip, the group headed east to Glover’s Reef Wildlife Conservation Society, an island about 40 miles off the coast. The island contained no stores nor people living there.

“It was two very different worlds,” Boyer said of the island and rainforest. “Which was one of the reasons we leaned toward this trip.”

The students had to pick research projects on the island as well. One group studied the eating habits of shallow ocean animals, while others studied fish, hermit crabs, blue crabs and pelicans.

The highlight of the trip for many students was snorkeling off the reef, sometimes with jellyfish, other times with sharks.

“A shark swam between me and my sister,” Hailey Webb said. “I thought it was cool after I realized it wasn’t a shark that bites. Nurse sharks are not aggressive.”

Another research group was “chumming the water” off the dock in an attempt to lure tiger sharks in. Loga jumped in the water with the chum and got “some great GoPro footage.”

“I really liked the upside-down jellyfish that we snorkeled above, even though it was really scary,” Link said.

“This was definitely a once-in-a-lifetime experience,” Lily Webb said. “This is how I will remember my high school years, since most of them were shut down by COVID.”

The kids even saved a sea turtle, not something that happens in Wisconsin. Neubauer found the flipped over turtle while exploring behind their island huts.

“It was so big I couldn’t pick it up,” he said. “I thought it might be dead, but it wasn’t. It just flipped over on its back and stuck.”

The kids dumped water on it with buckets until two fishery officers docked and cleared a path to the water for the turtle, which they flipped over.

In 2024, Boyer will lead students from Plum City School District to South Africa to study rhinoceroses. The next Elmwood trip will take place in 2026, destination unknown.

Loga has been inspired by his experience and found out something about himself.

Elmwood students donated school supplies to a Belizean school in July. Although school wasn’t in session at the time, the principal sent a thank you picture later.Photo courtesy of Kristel Boyer 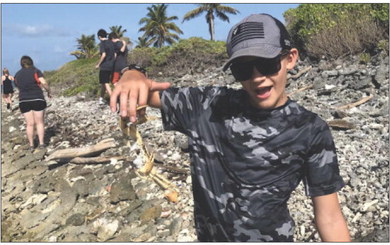 Studying sea life at Glover’s Reef off the coast of Belize was a highlight for Elmwood science students this past July. Photo courtesy of Kristel Boyer