The Uplands will no longer include commercial tenant

The proposed twin homes will be intended for owner occupants and geared toward empty nesters, though there is no age restriction.

The developer is proposing access to the neighborhood via Paulson Road (directly across from Saturday Properties’ access). Sidewalks would be constructed on both sides of the street and a 10-foot trail is planned along Paulson Road as part of the North Lopp water and sewer infrastructure project, connecting the new neighborhood to Whitetail Ridge Corporate Park.

Because the developer is asking for fivefoot yard setbacks instead of the required 10 in R3-zoned developments, they said they will provide an unpaved natural trail along the wetland perimeter as additional open space. The builder and/or homeowners association would be responsible for trail maintenance.

The neighborhood would also have a playground and offer two twin home styles at different price points.

Plan Commissioner Christopher Holtkamp asked in terms of architectural design, if there would be any possibility of something without “10 feet of garage sticking out.” He admitted he prefers “backloading the homes” so there can be alleys, so it’s “not having it look like generic suburbia, brown homes on cul-de-sacs and garages.”

Burns said that conversation can be had with the developer before plans are finalized.

“It’s just so boring and bland,” Holtkamp said. “It’s easy to build and people want garages in front. I don’t know, I think we can do better.”

Others expressed concerns about traffic in the high-density area, especially with several roundabouts not far away. Plan Commissioner Mike Woolsey said not everyone likes homes at this location, but it will help fill the housing shortage identified in a 2018 housing study.

“One of the things that guides my decisions on this is looking back at the housing study that we did, and I feel like even though, you know, people might have an opinion about this location and we’ve talked about this with the other developments that are nearby, is this the right use?” he said. “It does answer the shortages that we have in multi-family housing.”

Plan Commissioner Patricia LaRue said she would have preferred the property be used for commercial, especially with the Mann Valley Corporate Park going in nearby and the truck traffic that’s sure to follow.

The 101-unit multi-family apartment building proposed next to Tattersall on Paulson Road, for which the city council approved the GDP on Sept. 27, proposed a change in design to the plan commission in its Specific Implementation Plan (SIP). Developer Matt Frisbie said they were going to lease 5,000 square feet on the ground floor to a fitness franchise, who backed out due to “uneasiness in the economy.”

The group proposed to make the ground floor additional housing rather than a commercial tenant and changed the project name to The Uplands. The four-story apartment building slated for the lot north of Tattersall (1777 Paulson Road) will include eight studio units, seven studio/alcove units, 53 one-bedroom units, 15 one-bedroom plus den units and 17 two-bedroom units. The development will also include staff offices, a lobby, a large community room, a dog washroom, a bike workshop room and three individual business work rooms. Outside amenities are a large courtyard with shaded canopies and trellises, lounge seating, grilling, game options, outdoor fitness, and landscaped and dog walk areas. A second-floor common outdoor roof deck will also be constructed.

While the plan commission unanimously approved the SIP be forward to city council, Holtkamp raised concerns about traffic on Paulson Road.

“If we’re putting 400 units on Paulson Road (between three proposed developments), what’s going to happen to that little intersection at Paulson and Main Street?” he asked. “I mean, it’s already a wicked stupid intersection, so like, how much dumber is it going to get with 400 more cars driving.”

City Planner Emily Shively said so far, no concerns have been raised by engineering staff about the intersection. Since the area is part of Tax Increment District, resources may be available to address intersection concerns.

A new updated housing study will be released soon, city staff hinted, which indicates even more housing is needed.

The city council will vote on The Uplands SIP and the Thompson Heights GDP at its Nov. 22 meeting. 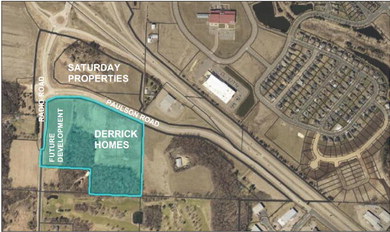 Derrick Homes is proposing an 86-unit two-family development on the southeast corner of Paulson and Radio roads (outlined in blue). The land is part of the recent Thompson annexation.Map courtesy of City of River Falls. 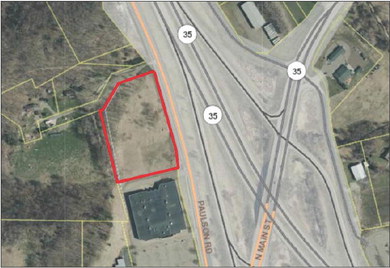 The Uplands, a 101-unit multi-family apartment building, is scheduled to be built on the lot north of Tattersall Distilling (1777 Paulson Road). Map courtesy of City of River Falls