The holidays are filled with hustle and bustle. We love the extra company but have had many, many cancellations from special events due to weather! Hopefully these folks will consider rescheduling. We began our week with singing as it is a good way to wake up and jump start the day. After lunch, the bird feeders were filled, mail delivered, and naps taken. By mid-afternoon we were ready for some popcorn. With full bellies, folks later played Tic Tac Toss. Winners this week were: Fourth, Francis White, Shirley Klinski; third place, Dorothy Pfaffe; second place, Kevin Bauer; and first place champ, Alice Brantner! A quick supper and we set up for bingo. We welcomed Teresa Fedie who helped us set up and deliver candy rewards.

Mass and communion began the day Tuesday. Father Jojo and Terry Pelzel arrived with their always happy, smiling faces. Folks stayed out for a fun game of “Name That Tune.” This week we listened to songs from the 50’s. First place was captured by Carol Bauer followed by her buddy Barb Grewe. Coming in just behind them at third was Mary Ellen Coulson and Shirley Klinski. Aileen Wayne, Goldie Helwig, and Alice Brantner each guessed a few as well. Since the craft supplies did not arrive (reindeer on strike), we decided to do some baking. We made a fun snack mix called “Reindeer Snack.” But we ate it all and saved none for the reindeer. Our evening concluded with a fun game of Uno with Aaliyah.

Wednesday brought out the bowlers. We pumped up the polka music and got ready to throw. Earning places were Shirley Klinski and Nancy Bishop in fourth, Kevin Bauer in third, Milda Bautch in second and first place (with two strikes) went to Dorothy Pfaffe. It was on to afternoon activities beginning with fruit bingo. Thanks to Harriet Rothe for assisting with calling numbers. Black out winner this week was Shirley Porrazzo. Many of our folks stayed out for our mid-week social: Wednesday Wine, Cheese & Crackers.

Marlene Zimmer joined us Thursday morning to read all the happenings from the local papers. We loved reading the Letters to Santa from all the little ones in the area. Lunch followed and mid-afternoon many of the ladies lined up for manicures. With nails drying, we enjoyed seeing Brad Richardson arrive with his totes full of puppies. They are so fun to hold and even more fun to watch them tumble and play. Our evening finished with a good game of Pokeno.

Drummers found their way to the dining room on Friday morning and were so excited to play. Sticks flew, toes tapped and a few even sang with the songs. Polkas and marches concluded our time and soon lunch was served. Our dining room lost its Christmas décor in the afternoon and soon it resembled a New Year’s Eve party! Jeff Bechel arrived and set up for some fantastic music. We enjoyed his great hits and snacked on popcorn and our favorite beverage. After the fun and festivities, we enjoyed the evening watching a musical, “Seven Brides for Seven Brothers.” Day light is hard to come by this time of year, so consider bringing a little sunshine by stopping in to visit. We’ll have cookies and cocoa to share. 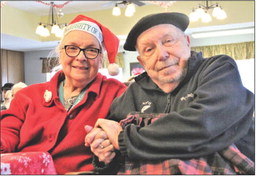 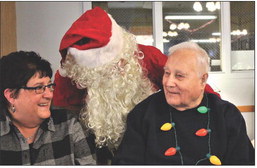 Herb Tschumperlin had a rough time convincing Santa that he was on the “nice” list. His daughter Jeanne wouldn’t vouch for him.Photo courtesy of Laura Kadlec 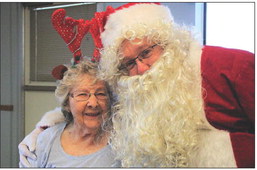 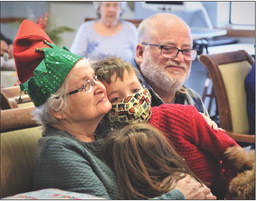 Nothing says it better than family and little ones with Janet Robelia. Photo courtesy of Laura Kadlec