A couple of the rooms at the newly renovated Harbor Hotel (previously River Heights Motel). Designer and owner Megan Langer makes the bed the centerpiece of each room. Photo by Riley Dorau
News
Langer breathes new life into new project, The Harbor Hotel

PRESCOTT – Another Prescott landmark is getting a facelift, thanks to entrepreneur and 2022 Prescott Chamber of Commerce Community Member of the Year Megan Langer.

Langer, who bought the former River Heights Motel (1020 U.S. Highway 10) April 1, chose the name for her new project, The Harbor Hotel, “to continue with the names downtown” she has used at other locations in Prescott, such as The Cove Guest House and Port of Prescott boutique hotel. Langer started remodeling the brick motel in June.

When starting this project, Langer said that she “loves a challenge.” She believes the location, structure and potential of The Harbor Hotel is “so great.” It surprised her that no one had bought the motel, which was for sale for many years, and remodeled it.

“People have a perception that this place is really run-down and in terrible shape,” Langer said. “It needs a lot of work but is not as bad as everyone visualizes it to be.”

Langer has redone all the rooms to fit a theme, similar to The Port of Prescott boutique hotel, located in the former Most Pharmacy building. However, unlike The Port, “the depth of work will be a lot less.” Langer said she is keeping sheetrock and room layouts intact, but still creating a different look with new light fixtures, trim, windows, doors, flooring and furniture. She has taken everything out and “given a facelift to each room.”

This building is also Langer’s largest project to date as the building is 10,000 square feet. The remodel is not done yet, though. In the main entrance, she plans on building a social area. Langer said that area’s theme will be “nostalgic Americana” with a navy, burgundy and beige “take on it.” The exterior of the building has been painted a rich, deep Navy blue, matching The Port and The Cove buildings.

Langer explained when designing a room, “The bed is my focal point. People don’t typically come to a hotel room to hang out in the hotel room; they’re there to sleep. So, we build everything around the bed.”

She wants her design to feel like an experience. She revealed that she likes to use applications and products that people describe as, “really cool but I would never be able to do that in my house.” Langer emphasized her love for stepping-out of the box.

“I like to pleasantly shock people without overwhelming them.” 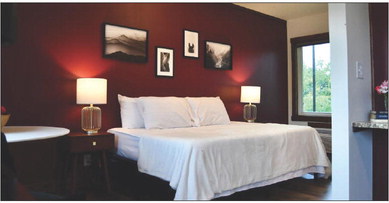