One of the most decorated athletic careers in Prescott history added another trophy to the case after bookending her 2022 senior season with the Cardinals’ softball team.

Prescott senior Liz Rohl, who has been a standout in girls’ golf, basketball and softball, was selected as the 2022 Middle Border Confer

ence Co Player of the Year, marking her as one of the two best players in one of the best softball conferences in the state. Rohl shares the award with sophomore Rylee Spindler of Altoona.

In addition to Rohl’s se

lection to First Team All Conference and as the Co Player of the Year, Prescott had five other Car dinals receive recognition, including senior Maddie Miller and junior Taylor Graf on the First Team, senior Ari Temmers and junior Izzy Matzek on the Second Team and freshman Leah French on the Honorable Mention list.

Throughout the 2022 sea son, Rohl established herself as one of the best players in the conference each time she took the field. She made hus tle plays, laying out for balls in the infield, she hit for power, and sprayed the ball to all fields. Perhaps her most important attribute is the leadership and energy she brought to the locker room each day.

“She is 100% deserving of this. She had an unbeliev able year,” Johnson said. “She also made Second

Spindler tallied nine pitching wins for the season, which included 117 strike outs. She was also dominant at the plate, batting .500 on the year with 10 doubles, five triples and three home runs. Johnson stated that for Rohl to only be an infielder and hitter, shows the respect that she has throughout the conference.

“Since I’ve been around, it’s always a pitcher and hit ter that get Player of the Year in our conference,” Johnson said. “It just shows the re spect that Liz has from our conference coaches for them to vote her that high and then vote her for player of the year. Everyone knows what kind of person and player she is.”

Rohl has become some what of a legend in Prescott for her ability to lead a team. In the fall, golf coach Chad Salay spoke of Rohl as one of the best leaders he’s ever had. In the winter, basketball coach Joan Korfhage spoke of Rohl as the “heart and soul” of the team. Johnson spoke about how he views Rohl as an individual and leader.

“She is one of the most amazing people I’ve ever been around,” Johnson said. “Her leadership skills are as good as I’ve ever seen. She has no fear and I think that’s what made her so great. She wasn’t scared to do and say some things that typical high school kids don’t do these days.”

Johnson expanded on his thought, stating that the way she leads a team is that of a dying breed and that kids like Rohl don’t come along much – if ever.

“She doesn’t care what

people think,” Johnson said. “If she thinks it’s the right thing to do and that’s what’s best for the team, she’s going to do it. I think that’s what separated her so much – she would do anything for the team. We’re going to miss her, not just in softball, but to be around. We wish her nothing but the best.”

erage and OPS among everyday starters. She also served unquestionably as the primary leader on a team that finished the season with

nificant contributions this season from the other two First

Conference players in the aforementioned Graf and Miller – the pitcher and first baseman respectively.

Graf served as the Cardinals’ bona fide ace the entire season and always pitched in the biggest games of the year, including two games against Baldwin Woodville in the reg

“Taylor is a phenomenal pitcher and now she added her bat this year, she hit .370 as a hitter and is a top

six hitter in our lineup,” Johnson said. “As a pitcher, she’s as good as I’ve seen all around the state. The best thing about Taylor is that she’s coming back for an

Johnson has been around great pitching for years dating back to his days as a player. He said that although Graf is already a certi

fied ace, there is one area that she could im

prove that would take her to another level that very few high school pitchers ever reach.

“She’s always looking to get better and she puts her work in,” Johnson said. “If she can just pick up a little more velocity – she’s at 60 mph, but if she could get to 62, she could potentially be unhittable. Velocity for her would be a big thing, because her off

speed pitches, she has all that. She’s got the whole package, but if she adds to that fast

ball, she’s going to be even more lethal.”

As for Miller, she played her senior season as a great first baseman defensively, but she hung her hat on dominance at the plate which included eight doubles, four home runs and a batting average of approximately .300.

“Maddie had a good junior year, but this year, she was just fantastic as a hitter,” John

son said. “She put work in on defense and played well, she stepped up as a leader and I’ve never seen a girl hit the ball as hard as Maddie Miller. She had a great year and is going to be missed as well.”

Rohl, Graf and Miller rounded out the First

Conference honors. Both Temmers and Matzek provided important support for the team in the field with lights

out defensive ability and consistent hitting near the top of the batting order.

“Defensively they were fantastic, they committed seven errors together in a whole season, that’s just incredible,” Johnson said. “Ari (Temmers) moved to shortstop after playing outfield last year, she had three errors all year. Izzy (Matzek) is one of the best de

fensive infielders in the conference and hit over .400 in conference. I think they were de

Temmers and Matzek not making the cut for First

Conference is a testament to the strength and talent in the MBC.

“Second Team is still an honor in this con

ference. Our conference is so good,” Johnson said. “There was really nobody on the first team where you could say, ‘They weren’t de

serving.’ Sure, I’m nitpicking, but the girls on First

Team were really good. It’s a credit to our conference.”

The final Prescott softball player to re

ceive recognition for the season is the afore

mentioned freshman catcher Leah French, who was one of three freshmen in the Middle Border to make any of the three All

French made an impact in every game with her ability to block pitches in the dirt, keep runners honest with her arm and throw baserunners out when given the chance. Coach Johnson spoke about the freshman catcher.

“Defensively, it’s not even close. I’d put her up against any person in the state defen

sively, I don’t care what grade,” Johnson said. “Her conference numbers as a hitter weren’t as impressive as her overall num

bers. We’re supposed to vote on the confer

Getting votes as a freshman at the All

Conference meeting is challenging, regard

less of the numbers. Older players are typically given the benefit of the doubt. John

“I think it (her being a freshman) 100% plays into the voting,” Johnson said. “I think it does. I don’t vote like that. I’m voting for who I think are the top 22 girls. I don't want to speak for other coaches, but I think some feel that way.”

The Cardinals won a conference champi onship, made it to a sectional semifinal and had six student athletes get All

Conference recognition for the 2022 season. By any met

rics, Prescott had a successful year. 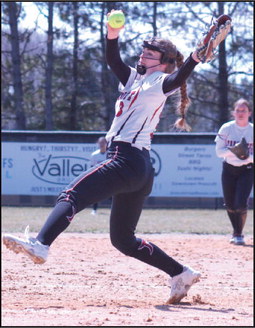 Prescott junior ace pitcher Taylor Graf delivers a strike during a game earlier this season. She consistently faced the best competition, performed well, and was named FirstTeam AllConference for her efforts.Photo by Reagan Hoverman 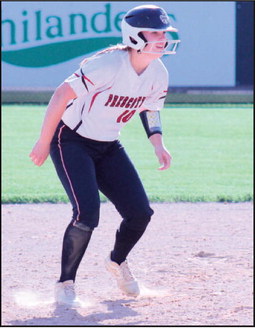 Prescott senior first basemen Maddie Miller takes a lead off of second base during a game earlier this season. Miller made huge strides from her junior to senior year and became one of the team’s best power hitters. She was selected to be FirstTeam AllConference for her successful season. Photo by Reagan Hoverman