The Ellsworth Hubbers have ovcially made the Wisconsin Baseball Association (WBA) playous for the first time in more than four years.

With only one game re- maining in the regular sea son, the Ellsworth Hubbers were one win shy of guaranteeing themselves a spot in the postseason. Clutch hitting and pitching throughout a nine-inning battle with the Bay City Bombers pushed the Hubbers over the hump and into the playous with a 6-4 win on Sunday, July 31.

The back and forth on the scoreboard continued when Ellsworth hung a crooked number in the top of the fifth inning. The Hubbers scored four runs to start the fifth inning, two of which came from Chuck Hewitt, who blasted a two-RBI double down the right field line.

After an ouensively explosive inning, the Ellsworth defense was put to the test in the bottom of the sixth frame. Ellsworth ace starting pitcher James Georgakas was on the mound. He started the inning with a leadou walk, giving up a ground-rule double and another walk to load the bases with no outs.

With a playou berth on the line, Georgakas dug down deep and retired the next three Bay City batters via force out, strikeout and a lineout to right field. In the highest pressure moment of the season, Gerogakas stepped up and kept Ellsworth's season alive.

Ellsworth wasn't out of the woods yet, as Bay City loaded the bases again in the bottom of the eighth inning. A single, an error and a walk juiced the bags with only one out again. Georgakas again delivered by retiring the ensuing two batters via flyout and a looking strikeout.

Going into the bottom of the ninth inning, Georgakas trotted back out to the mound hoping to finish ou a complete game victory. Instead, Bay City got two hits to start the inning which prompted a mound meeting.

After a short discussion, Gerogakas left the mound and young flamethrower Urban Broadway began warming up for his relief appearance. Broadway made his name as the ace starting pitcher for the Ellsworth Panthers High School team in the last two years.

Broadway came in and secured the save by retiring two of the first three batters that he faced. The celebration among the Hubbers' dugout began immediately as they all knew that they had punched a ticket to the playous for the first time in years

Ellsworth Hubbers pitcher Urban Broadway delivers a pitch during the Hubbers’ road game against Bay City on Saturday, July 31. Broadway made a relief appearance in the ninth inning and secured the save, which got Ellsworth into the playoffs. Photo by Reagan Hoverman

The Ellsworth Hubbers gather together after defeating Bay City on the road in the final regular season game of the year. The win pushed Ellsworth over the hump and officially secured a WBA playoff berth. Photo by Reagan Hoverman Hubbers

with the 6-4 victory on the road against Bay City. Ellsworth player/manager Jeremiah Paulson spoke about the tension of that game with everything on the line.

"My stomach just got out of the meat grinder," Paulson said while laughing after the win. "That was pretty much a win and get in the playous  what a big one that was. James (Gerogakas) battled his tail ou. Bas – es loaded jams, bases loaded with no outs, even Urban (Broadway). Give credit to an 18-year-old for being in a big situation with ice water in his veins. He went out there and did his job." After Ellsworth and Bay City shook hands, the Hubbers had a long postgame talk. A lot of players left the meeting with big smiles. Paulson spoke about what he told his group of players in that postgame speech.

"I pulled the guys in, put our arms around each other and I thanked them because this is the first time we've been in the playous since I took over," Paulson said. "As I watch the end of my playing career get closer and clos- er, I find myself cheering harder and harder for these guys. This is part of my DNA, but I'm learning to compete without competing. These guys work so hard and pull for each other, they don't have egos  I'm so happy for these guys." The road to the playous for the Hubbers wasn't an easy one. July wasn't a kind month to the Hubbers, as Paulson said after the Bay City game. Throughout July Ellsworth lost several one-run games and also had multiple walk-ou losses. That's what made the playou clincher in Bay City all that more special for the Hubbers.

"July hasn't been very nice to us," Paul – son said. "If you take away the Spring Valley game where we got rolled, everything has been one-run or two-run ballgames. Osceo – la was a 2-1 game, Plum City walked us ou, River Falls walked us ou." Ellsworth has a busy schedule in the com – ing weeks as the Hubbers will compete in the annual St. Croix Valley Baseball League tournament on Saturday, Aug. 6, and Sunday, Aug. 7, and then will be one of six sites in Wisconsin hosting WBA playou games on Friday, Aug. 12, and Saturday, Aug. 13.

According to Paulson, the system for the playous is pool play and there will be two groups of three teams in Ellsworth. The win – ner of each pool will advance to state. River Falls is one of the other five sites throughout the state that will host playou games. 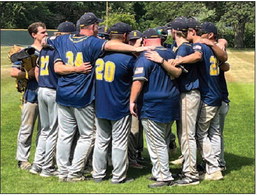