The River Falls girls golf team is getting some much-needed time ou ahead of the annual Big Rivers Conference championship, which is slated for Wednes- day, Sept. 21, at the Lake Wissota Golf Course in Chippewa Falls.

It’s been a grueling couple of weeks for the River Falls girls’ golf team. Three and four-meet weeks have taken a toll on the Wildcats and its impacted play and morale, according to head coach Tim LaVold.

"We've got a week to prepare and that’s good, we need it right now,” LaVold said. “It’s just a good time to reset and get ready for the next step. We need to get some people healed up. We need some rest and a com- petitive break because the varsity schedule is a grind.”

It became apparent that the Wildcats needed a com- petitive break to regroup and heal up after the two meets last week. The first was at the Spring Valley Golf Course on Tuesday, Sept. 13. River Falls earned a fourth-place finish with a team score of 197, trailing New Richmond, Hudson and Chippewa Falls.

Juniors Ellie Krueger and Mahlia McCane led the Cats in scoring with posted scores of 47. Junior Aili Lassi shot a 50, and seniors Mollie Schmidt and Alisha Latham rounded out the scoring with both posting scores of 53.

The Wildcats had anoth- er quick turnaround as they competed less than 24 hours later in the final regular sea son Big Rivers Conference meet at the River Falls Golf Course. The quick turn – around took its toll on the Wildcats, as River Falls posted a team score of 205 en route to a fifth-place finish.

McCane led the Wildcats with a 46, Lassi posted a 49, Schmidt shot a 54, Lathan posted a 56 and Krueger rounded out the scoring with a 57. For LaVold and the Riv er Falls roster, it was a day to forget as the scores were well above season averages. He spoke about a tough last cou ple of meets for the Wildcats.

“The last couple of days have been tough,” LaVold said. "We finished last week strong, so this week, it al –

most feels like they're start ing to feel some pressure of the end of the year because they know it's coming. Sometimes golf just bites back, and it's done that in the last two days.”

While certainly fatigue has been the main factor in the Wildcats’ struggles throughout the last week, issues around the greens haven’t helped. At the Big Rivers meet at River Falls on Wednesday, thick rough and fast greens proved to be a tough obstacle for the Wild- cats. LaVold spoke about giving shots back around the greens.

“The greens are running at a pretty good speed and there's a little bit of thick grass around the holes,” La-Vold said. “A lot of times in golf you’ve got to be in the right position to score well and if you get out of po- sition, you can make high numbers.”

River Falls wasn’t the only team that struggled on Wednesday afternoon. Typ- ically, a fifth-place score at a BRC meet would be in the high 30s. McCane’s 46 se- cured a fifth-place finish at the River Falls Golf Course on Wednesday, which highlighted a tough day for all competitors.

The Wildcats will look to regroup and get healthy mov- ing forward. LaVold spoke about the end of the regular season and how the season has gone by in a flash.

"We have a week ou un til the BRC meet and then the following meet is a week from that,” LaVold said. “Today is the end of the regular season and it’s been a grind. The next step is to reset our minds, get our bodies healed up a little bit, and get focused so we can go into the play- ous playing the best golf we

While there have been struggles in the closing week of the regular season, LaVold and the Wildcats remain in a good position to capture the biggest goal of the season – getting to sectionals as a team. That path will go through the Division 1 Re gional tournament at the Mill Run Golf Club in Eau Claire.

LaVold stated that at this time of the season, it’s too late to make any major changes to swings or im- prove scores significantly. Instead, his roster will have to focus on course manage- ment, positive self-talk and playing overall smart golf.

“You are who you are at this point,” LaVold said. "Now the process is how they're talking to themselves out there, using course strat- egy and working on short games a little bit. Our goal is to make it to the sectional tournament and we still have a really good chance of doing that.”

River Falls is back in ac tion on Wednesday, Sept. 21, at the Lake Wissota Golf Course in Chippewa Falls for the BRC Championship. That meet is slated to begin at 9 a.m. 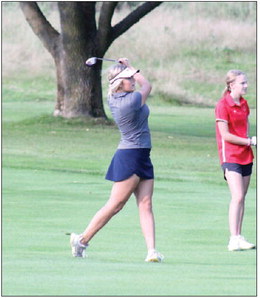 River Falls junior Ellie Krueger hits a hybrid from the middle of the fairway during her competitive round at the River Falls Golf Course on Wednesday, Sept. 14. Krueger finished the nine-hole round with a 57. Photo by Reagan Hoverman