Spring Valley sophomore quarterback Cade Stasiek rolls out of the pocket and looks for an open receiver downfield during the Cardinals’ home opener against Colfax on Friday, Sept. 16. It was Stasiek’s first start of the season, as he stepped in for injured full-time starter junior Wyatt Goveronski. Photo by Reagan Hoverman
News
Spring Valley football alone atop conference standings

Cardinals improve to 4-1 after blowout win over Colfax

Neither the Colfax defense nor the hurricane-like downpour could slow down Spring Valley's ouense in the home opener on Fri day, Sept. 16.

The Spring Valley Cardinals cruised to a 54-6 victory against olfax on Friday night. The ardinals controlled the game from the opening kick and tallied more than 300 rush ing yards in the blowout win to grab sole pos- session of first place in the Dunn-St. roix Conference standings.

For Spring Valley head coach Ryan Kap – ping, Friday night's first-half dominance, which included a 32-0 lead going into the halftime intermission, was a response to a challenge he issued to the roster this week.

He spoke about challenging his roster to play consistently throughout the entire game.

While the ardinals looked elite on Friday night, it wasn’t with the usual cast of characters. Spring Valley junior Cade Stasiek got the start at quarterback in place of the injured junior Wyatt Goveronski, who had previous- ly started every game this season. Goveronski suuered an ankle injury in the second half of last week's 27-12 win over Glenwood ity.

Because of that injury, it was Stasiek who led the Cardinals throughout the down- pour-laden Friday night victory in Spring Valley. The sophomore quarterback came in and didn't miss a beat, as Spring Valley con – tinued its ouensive excellence, especially on the ground.

siek's ability to step in as a starter at a mo –

Cade (Stasiek) to be able to step in like that,” Kapping said. "He made some mistakes, but for the most part, he was solid. Even with the rain and conditions, that makes it a little tougher. I thought he did the job really well.”

Spring Valley certainly won at the line of scrimmage. The ardinals got an excellent push  both ouensively and defensively  which helped open the game up on both sides of the ball. Some of that pressure on the quar terback forced errant throws of which Spring Valley’s secondary took advantage.

Junior linebacker Kaden Robelia took ad vantage of one of those errant Colfax throws late in the second quarter when he jumped a curl route, picked the ball ou, and took it to the house for a pick-six. His score gave Spring Valley that 32-0 lead going into halftime. Kapping spoke about the secondary.

“That’s the thing, we just don’t want to give up the big play,” Kapping said. “We have that bend, don’t break mentality. It’s a lot of young guys that didn’t play last year in our secondary. They’re almost all brand new. They’re growing too. We gave up some big plays at Boyceville a few weeks ago and we’re just getting better each week. Last night, I challenged the guys to score on defense and they did that.”

Spring Valley’s 54-6 victory against Colfax improved the Cardinals’ record to 4-1 for the season and 3-0 in Dunn-St. Croix Conference action. Spring Valley remains the lone undefeated team in conference play this season, as both Elmwood/ Plum City and Turtle Lake lost on Friday night.

While Kapping wasn’t aware of those two losses when Spring Valley’s game ended, he spoke about the conference and how things have shaken out through the first three weeks of league action.

“We knew Cadott, Turtle Lake and Elmwood/Plum City were all going to be teams (near the top) at the end,” Kapping said. “We’ve got a tough stretch coming up. We’ve got Clear Lake next week and then we go on the road to Turtle Lake and then finish it out with Cad ott and Elmwood. We need to take it a week at a time and keep trying to improve and play better football each week.”

Although Stasiek had a productive week under center for Spring Valley, there is optimism among the Car- dinals coaching stau that the full-time starter, Goveronski, could return as early as the Friday night week six game against Clear Lake.

“He was injured in the second half last week and it’s an ankle thing,” Kapping said. “We’re hoping it’s maybe another week and then hopefully he will be working his way back in.”

Based on Kapping’s comments, it appears that Goveronski will be a game-time decision for week six. That game against Clear Lake is slated for Friday, Sept. 23, at the Spring Valley football field and is slated to begin at 7 p.m. 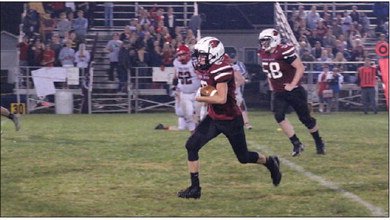 Spring Valley junior linebacker Kaden Robelia streaks down the sideline after intercepting a pass that he ended up taking nearly 50 yards to the endzone for a pick-six. Robelia’s defensive touchdown helped secure Spring Valley’s 54-6 victory. Photo by Reagan Hoverman