It’s a day he thought would never come. Yet it’s almost here and he’s a bit nervous.

A Purple Heart medal is presented to service members who have been wounded or killed as a result of enemy action while serving in the U.S. military, a sign that a service member has paid the ultimate price while in the line of duty.

Feuerhelm was wounded while on patrol in Iraq in 2005, where he served with the 100th Battalion, 442nd Infantry Regiment of the U.S. Army Reserve.

When he found out he would be receiving a Purple Heart, he couldn’t quite believe it.

“I was literally shocked because I didn’t think I would ever get it in my lifetime,” Feuerhelm said. “It was a pretty overwhelming day.”

The truck driver, who owns his own business, will be the featured speaker at the EMS Veterans Day program. He’s a bit nervous but excited to share his story and the history of his battalion, known as the “Purple Heart Battalion” with attendees.

“A buddy of mine said that’s one of the awards in the military you don’t want to get,” Feuerhelm joked. “But it’s kind of a big lift off of my shoulders. All of it’s bubbling up after 17 years.”

When Feuerhelm was in the service, his commander submitted the paperwork for the Purple Heart. However, for unknown reasons, the application was denied. Feuerhelm said it could have been something as simple as an application error; also, criteria and rules of acceptance were different back then.

“It was weird circumstances that it didn’t go through the first time,” Feuerhelm said. “Over the years I always thought about it, but do I want to pursue this? I just kind of forgot about it and didn’t want to remember it. Shut the door and let the past be the past. Family and friends kept asking me about it and I said ‘What about it?’” With the encouragement of those friends and family, he submitted the paperwork (which includes letters of recommendation, witness statements, etc.) to Pierce County Veterans Services Officer Scott Braden, who in turn contacted Kind’s staff. In what seemed like record time, Feuerhelm’s application was approved. He found out a couple of months ago.

“I didn’t really pursue it for me,” he said. “I pursued it for my family. They worried more than I did while I was over there. It affects us afterward, not while we were there. You can’t think about it because it will eat you alive over there.”

Feuerhelm joined the Army National Guard in 1992, after graduating from Ellsworth High School in 1991. While in school, his friend Jim asked him if he wanted to join the military.

“I didn’t think too much about it,” he said. “I was going to go to tech school for electronics in Duluth and I had to find a way to pay for it.”

After talking to the recruiter, he and Jim joined the Army National Guard and attended basic training in Fort Benning, Ga. They were in the same unit out of River Falls for six years. Feuerhelm eventually transferred to Red Wing and after stepping away for a couple of years, he rejoined the Army Reserve unit out of Beaver Dam.

“I was getting ready to become a Reserve drill sergeant,” Feuerhelm said. “Then my commander said I was going to Fort Shafter in Hawaii, to the 100th Battalion/442nd Infantry Regiment. To this day it’s one of the most decorated units in the military. It was a pretty cool honor once I found out what unit I was going to be a part of.”

The 100th Battalion/442nd Infantry Regiment is the only infantry unit in the US Army Reserve. During World War II, the unit contained almost all second-generation Japanese Americans. Feuerhelm spent about one month in Hawaii while waiting for more people to transfer into the unit before heading to training in Fort Bliss, El Paso, Texas.

In August 2004, Feuerhelm and the battalion were mobilized for duty in Iraq; they were stationed 50 miles northwest of Baghdad in Logistical Support Area Anaconda at Balad Air Base.

“Everyone coming into Iraq came into this base,” Feuerhelm said. “We did patrols up and down the roads looking for bombs. Sometimes we’d find them the easy way, sometimes we got hit. Our platoon alone was hit about 13 times total in that 11-month period that we were doing patrols. We were the hardest hit platoon out of the whole battalion. Every day wasn’t bad, but every day wasn’t good either.”

In May 2005, Feuerhelm and others were on patrol conducting route clearance when they got hit by a roadside bomb. Since he was the gunner, half of his body was sticking out of the armored Humvee when the bomb exploded, peppering him with rocks and shrapnel.

“I don’t remember a whole lot of that day because I was knocked out,” Feuerhelm said. I don’t know how long the guys down in the tank were knocked out. I woke up when the guys were tugging on my legs asking if I was okay.”

A Quick Reaction Team came out from the base and brought the service members to the triage center.

“I remember just laying there on the table and they were kind of poking and prodding me and doing an ultrasound on my belly to see if I had any internal bleeding,” Feuerhelm said. “I don’t remember much. Severe concussion and whiplash was the final report.”

A piece of rock or shrapnel from the bomb had become lodged in his protective plate vest. He had it made into a plaque and shipped it home. He also didn’t want to rest for too long after that.

“Infantry guys didn’t want to sit on the sidelines and wait for your buddies to go out on patrol; you wanted to go out there with them,” he said. “We were a closeknit group. I took a couple days off and they put me in the driver’s seat of the armored Humvee so I wasn’t so susceptible (to another potential explosion.) I went out a little too early than I was supposed to be. You didn’t really think about the dangers of being hurt or killed over there. It was a job.”

In total, Feuerhelm served in the military for 12 years. Near the end of his deployment in Iraq, his platoon was seeing heavier activity and getting hit more. One comrade got killed, another lost his legs from the knees down.

“My truck got hit again,” Feuerhelm said. “It affected the guys inside more because it hit beneath the vehicle. The blast come in from underneath.”

Feuerhelm was choppered out that time. And after that, he decided not to reenlist, even though a hefty bonus was being offered. His official discharge took place in February 2006.

“After that, I was like nope, I’m good,” he said. “I’m too old for this stuff. I was in my mid-30s. I figured the younger guys could take over. The money is not going to be worth anything if I get blown up over here. You just know when it’s time. I did not reenlist.”

Feuerhelm still has residual health issues from his injuries. He gets headaches on an almost daily basis and moments he describes as “drawing a blank.” He’s grateful for the health care he receives from the VA.

When he’s not on the road trucking, he pours himself into Bay City American Legion activities. He’s been a Legion member since 2007 when his neighbor Gene Olson convinced him to join. It’s a decision he’s never regretted. Although he served as the County American Legion Commander for two years and at the district level, he prefers the personal connections at the Post level. He likes helping out at local events Post 357 puts on, such as the Easter egg hunts, Santa visits and Halloween events.

“I served as Post Commander at Bay City for four or five years,” Feuerhelm said. “Now I’m the current Adjutant, which is basically the Post secretary. Terry Johnson is the current Commander.”

American Legions everywhere are hurting for members, he said.

“We need younger guys to fill the ranks,” he said. “I tell people, you can be a paid member and just help out when you can, even if it’s once a year. You don’t need to come to every meeting.”

The Ellsworth Middle School Veterans Day ceremony will be livestreamed on We Are Ellsworth for those who can’t make it in person. 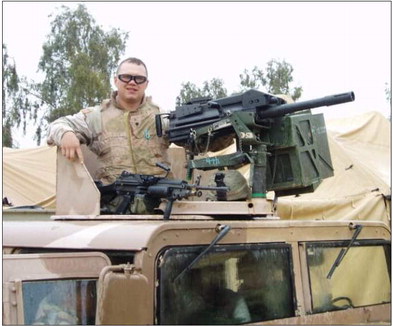 Devin Feuerhelm, while stationed in Iraq, was part of a team that patrolled roads leading between Balad Air Base and Baghdad. They looked for roadside bombs in an attempt to make the roads safer. Photo courtesy of Devin Feuerhelm